With current space-based missions it is now possible to obtain age-sensitive asteroseismic information for tens of thousands of red giants. This provides a promising opportunity to study the Galactic structure and evolution. We use asteroseismic data of red giants, observed by Kepler, to test the current theoretical framework of modeling the Galaxy based on population synthesis modeling and the use of asteroseismic scaling relations for giants. We use the open source code Galaxia to model the Milky Way and find the distribution of the masses predicted by Galaxia to be systematically offset with respect to the seismically inferred observed masses. The Galactic model overestimates the number of low-mass stars, and these stars are predominantly old and of low metallicity. Using corrections to the {{∆ }}ν scaling relation suggested by stellar models significantly reduces the disagreement between predicted and observed masses. For a few cases where non-seismic mass estimates are available, the corrections to {{∆ }}ν also improve the agreement between seismic and non-seismic mass estimates. The disagreement between predictions of the Galactic model and the observations is most pronounced for stars with {{[Fe/H]}}\lt -0.5 and {{[Fe/H]}}\gt 0 or for {T}{{eff}}\gt 4700 K. Altering the star formation rate in order to suppress stars older than 10 Gyr improves the agreement for mass but leads to inconsistent color distributions. We also tested the predictions of the TRILEGAL Galactic model. However, unlike Galaxia, it had difficulties in reproducing the photometric properties of the Kepler Input Catalog because it overestimates the number of blue stars. We conclude that either the scaling relations and/or the Galactic models need to be revised to reconcile predictions of theory with asteroseismic observations. 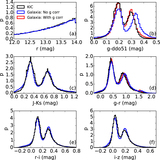