Keane et al. have recently claimed to have obtained the first precise localization for a fast radio burst (FRB) thanks to the identification of a contemporaneous fading slow (˜week-timescale) radio transient. They use this localization to pinpoint the FRB to a galaxy at z≈ 0.49 that exhibits no discernible star formation activity. We argue that the transient is not genuine and that the host candidate, WISE J071634.59-190039.2, is instead a radio variable: the available data did not exclude this possibility; a random radio variable consistent with the observations is not unlikely to have a redshift compatible with the FRB dispersion measure; and the proposed transient light curve is better explained as a scintillating steady source, perhaps also showing an active galactic nucleus (AGN) flare, than a synchrotron-emitting blastwave. The radio luminosity of the host candidate implies that it is an AGN and we present new late-time Very Large Array observations showing that the galaxy is indeed variable at a level consistent with the claimed transient. Therefore the claimed precise localization and redshift determination for FRB 150418 cannot be justified. 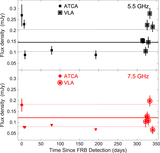