Evidence for Reflected Light from the Most Eccentric Exoplanet Known

Planets in highly eccentric orbits form a class of objects not seen within our solar system. The most extreme case known among these objects is the planet orbiting HD 20782, with an orbital period of 597 days and an eccentricity of 0.96. Here we present new data and analysis for this system as part of the Transit Ephemeris Refinement and Monitoring Survey. We obtained CHIRON spectra to perform an independent estimation of the fundamental stellar parameters. New radial velocities from Anglo-Australian Telescope and PARAS observations during periastron passage greatly improve our knowledge of the eccentric nature of the orbit. The combined analysis of our Keplerian orbital and Hipparcos astrometry show that the inclination of the planetary orbit is \gt 1\_\_AMP\_\_fdg;22, ruling out stellar masses for the companion. Our long-term robotic photometry show that the star is extremely stable over long timescales. Photometric monitoring of the star during predicted transit and periastron times using Microvariability and Oscillations of STars rule out a transit of the planet and reveal evidence of phase variations during periastron. These possible photometric phase variations may be caused by reflected light from the planet’s atmosphere and the dramatic change in star-planet separation surrounding the periastron passage. 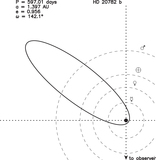