A sample of 102 local (0.02 ≤ z ≤ 0.1) Seyfert galaxies with black hole masses MBH > 107M☉ was selected from the Sloan Digital Sky Survey (SDSS) and observed using the Keck 10 m telescope to study the scaling relations between MBH and host galaxy properties. We study profile changes of the broad Hβ emission line within the three to nine year time frame between the two sets of spectra. The variability of the broad Hβ emission line is of particular interest, not only because it is used to estimate MBH, but also because its strength and width are used to classify Seyfert galaxies into different types. At least some form of broad-line variability (in either width or flux) is observed in the majority (∼66%) of the objects, resulting in a Seyfert-type change for ∼38% of the objects, likely driven by variable accretion and/or obscuration. The broad Hβ line virtually disappears in 3/102 (∼3%) extreme cases. We discuss potential causes for these changing look active galactic nuclei. While similar dramatic transitions have previously been reported in the literature, either on a case-by-case basis or in larger samples focusing on quasars at higher redshifts, our study provides statistical information on the frequency of Hβ line variability in a sample of low-redshift Seyfert galaxies. 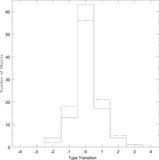