We compute upper limits on the nanohertz-frequency isotropic stochastic gravitational wave background (GWB) using the 9 year data set from the North American Nanohertz Observatory for Gravitational Waves (NANOGrav) collaboration. Well-tested Bayesian techniques are used to set upper limits on the dimensionless strain amplitude (at a frequency of 1 yr-1) for a GWB from supermassive black hole binaries of {A}{{gw}}\lt 1.5× {10}-15. We also parameterize the GWB spectrum with a broken power-law model by placing priors on the strain amplitude derived from simulations of Sesana and McWilliams et al. Using Bayesian model selection we find that the data favor a broken power law to a pure power law with odds ratios of 2.2 and 22 to one for the Sesana and McWilliams prior models, respectively. Using the broken power-law analysis we construct posterior distributions on environmental factors that drive the binary to the GW-driven regime including the stellar mass density for stellar-scattering, mass accretion rate for circumbinary disk interaction, and orbital eccentricity for eccentric binaries, marking the first time that the shape of the GWB spectrum has been used to make astrophysical inferences. Returning to a power-law model, we place stringent limits on the energy density of relic GWs, {{{Ω }}}{gw}(f){h}2\lt 4.2\quad × \quad {10}-10. Our limit on the cosmic string GWB, {{{Ω }}}{gw}(f){h}2\lt 2.2\quad × \quad {10}-10, translates to a conservative limit on the cosmic string tension with Gμ \lt 3.3× {10}-8, a factor of four better than the joint Planck and high-l cosmic microwave background data from other experiments. 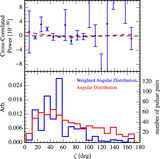