The statistics of shear peaks have been shown to provide valuable cosmological information beyond the power spectrum, and will be an important constraint of models of cosmology in forthcoming astronomical surveys. Surveys include masked areas due to bright stars, bad pixels etc., which must be accounted for in producing constraints on cosmology from shear maps. We advocate a forward-modeling approach, where the impacts of masking and other survey artifacts are accounted for in the theoretical prediction of cosmological parameters, rather than correcting survey data to remove them. We use masks based on the Deep Lens Survey, and explore the impact of up to 37% of the survey area being masked on LSST and DES-scale surveys. By reconstructing maps of aperture mass the masking effect is smoothed out, resulting in up to 14% smaller statistical uncertainties compared to simply reducing the survey area by the masked area. We show that, even in the presence of large survey masks, the bias in cosmological parameter estimation produced in the forward-modeling process is ≈1%, dominated by bias caused by limited simulation volume. We also explore how this potential bias scales with survey area and evaluate how much small survey areas are impacted by the differences in cosmological structure in the data and simulated volumes, due to cosmic variance. 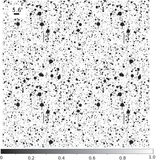