We have discovered six radio millisecond pulsars (MSPs) in a search with the Arecibo telescope of 34 unidentified gamma-ray sources from the Fermi Large Area Telescope (LAT) four year point source catalog. Among the 34 sources, we also detected two MSPs previously discovered elsewhere. Each source was observed at a center frequency of 327 MHz, typically at three epochs with individual integration times of 15 minutes. The new MSP spin periods range from 1.99 to 4.66 ms. Five of the six pulsars are in interacting compact binaries (period ≤ 8.1 hr), while the sixth is a more typical neutron star-white dwarf binary with an 83 day orbital period. This is a higher proportion of interacting binaries than for equivalent Fermi-LAT searches elsewhere. The reason is that Arecibo's large gain afforded us the opportunity to limit integration times to 15 minutes, which significantly increased our sensitivity to these highly accelerated systems. Seventeen of the remaining 26 gamma-ray sources are still categorized as strong MSP candidates, and will be re-searched. 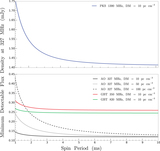