We performed a monitoring observation of a Jupiter-family comet, 17P/Holmes, during its 2014 perihelion passage to investigate its secular change in activity. The comet has drawn the attention of astronomers since its historic outburst in 2007, and this occasion was its first perihelion passage since then. We analyzed the obtained data using an aperture photometry package and derived the {Af}ρ parameter, a proxy for the dust-production rate. We found that {Af}ρ showed asymmetric properties with respect to the perihelion passage: it increased moderately from 100 cm at the heliocentric distance of rh = 2.6-3.1 AU to a maximal value of 185 cm at rh = 2.2 AU (near the perihelion) during the inbound orbit, while dropping rapidly to 35 cm at rh = 3.2 AU during the outbound orbit. We applied a model for characterizing dust-production rates as a function of rh and found that the fractional active area of the cometary nucleus had dropped from 20%-40% in 2008-2011 (around the aphelion) to 0.1%-0.3% in 2014-2015 (around the perihelion). This result suggests that a dust mantle would have developed rapidly in only one orbital revolution around the Sun. Although a minor eruption was observed on UT 2015 January 26 at rh = 3.0 AU, the areas excavated by the 2007 outburst would be covered with a layer of dust (≲10 cm depth) which would be enough to insulate the subsurface ice and to keep the nucleus in a state of low activity. 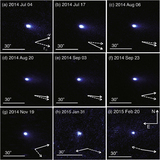