Luminous Compact Blue Galaxies (LCBGs) are an extreme star-bursting population of galaxies that were far more common at earlier epochs than today. Based on spectroscopic and photometric measurements of LCBGs in massive (M > 1015 M☉), intermediate redshift (0.5 < z < 0.9) galaxy clusters, we present their rest-frame properties including star formation rate, dynamical mass, size, luminosity, and metallicity. The appearance of these small, compact galaxies in clusters at intermediate redshift helps explain the observed redshift evolution in the size-luminosity relationship among cluster galaxies. In addition, we find the rest-frame properties of LCBGs appearing in galaxy clusters are indistinguishable from field LCBGs at the same redshift. Up to 35% of the LCBGs show significant discrepancies between optical and infrared indicators of star formation, suggesting that star formation occurs in obscured regions. Nonetheless, the star formation for LCBGs shows a decrease toward the center of the galaxy clusters. Based on their position and velocity, we estimate that up to 10% of cluster LCBGs are likely to merge with another cluster galaxy. Finally, the observed properties and distributions of the LCBGs in these clusters lead us to conclude that we are witnessing the quenching of the progenitors of dwarf elliptical galaxies that dominate the number density of present-epoch galaxy clusters. 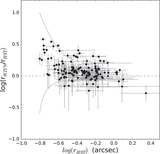