We study the dynamics of the stellar interior of the early red-giant star KIC 4448777 by asteroseismic inversion of 14 splittings of the dipole mixed modes obtained from Kepler observations. In order to overcome the complexity of the oscillation pattern typical of red-giant stars, we present a procedure to extract the rotational splittings from the power spectrum. We find not only that the core rotates from a minimum of 8 to a maximum of 17 times faster than the surface, confirming previous inversion results generated for other red giants (Deheuvels et al.), but we also estimate the variation of the angular velocity within the helium core with a spatial resolution of 0.001R and verify the hypothesis of a sharp discontinuity in the inner stellar rotation. The results show that the entire core rotates rigidly and provide evidence for an angular velocity gradient around the base of the hydrogen-burning shell; however, we do not succeed in characterizing the rotational slope, due to the intrinsic limits of the applied techniques. The angular velocity, from the edge of the core, appears to decrease with increasing distance from the center, reaching an average value in the convective envelope of 68 ± 22 nHz. We conclude that a set of data that includes only dipolar modes is sufficient to infer quite accurately the rotation of a red giant not only in the dense core but also, with a lower level of confidence, in part of the radiative region and in the convective envelope. 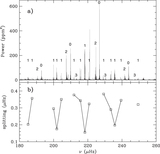