HD 179070, aka Kepler-21, is a V = 8.25 F6IV star and the brightest exoplanet host discovered by Kepler. An early detailed analysis by Howell et al. of the first 13 months (Q0-Q5) of Kepler light curves revealed transits of a planetary companion, Kepler-21b, with a radius of about 1.60 ± 0.04 {R}\oplus and an orbital period of about 2.7857 days. However, they could not determine the mass of the planet from the initial radial velocity (RV) observations with Keck-HIRES, and were only able to impose a 2σ upper limit of 10 {M}\oplus . Here, we present results from the analysis of 82 new RV observations of this system obtained with HARPS-N, together with the existing 14 HIRES data points. We detect the Doppler signal of Kepler-21b with a RV semiamplitude K = 2.00 ± 0.65 {{m}} {{{s}}}-1, which corresponds to a planetary mass of 5.1 ± 1.7 {M}\oplus . We also measure an improved radius for the planet of 1.639 +0.019/-0.015 {R}\oplus , in agreement with the radius reported by Howell et al. We conclude that Kepler-21b, with a density of 6.4 ± 2.1 {{g}} {{cm}}-3, belongs to the population of small, ≲6 {M}\oplus planets with iron and magnesium silicate interiors, which have lost the majority of their envelope volatiles via stellar winds or gravitational escape. The RV analysis presented in this paper serves as an example of the type of analysis that will be necessary to confirm the masses of TESS small planet candidates.

Based on observations made with the Italian Telescope Nazionale Galileo (TNG) operated on the island of La Palma by the Fundación Galileo Galilei of the INAF (Istituto Nazionale di Astrofisica) at the Spanish Observatorio del Roque de los Muchachos of the Instituto de Astrofísica de Canarias. 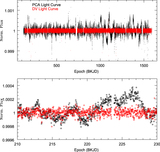