The MaNGA Survey (Mapping Nearby Galaxies at Apache Point Observatory) is one of three core programs in the Sloan Digital Sky Survey IV. It is obtaining integral field spectroscopy for 10,000 nearby galaxies at a spectral resolution of R ∼ 2000 from 3622 to 10354 Å. The design of the survey is driven by a set of science requirements on the precision of estimates of the following properties: star formation rate surface density, gas metallicity, stellar population age, metallicity, and abundance ratio, and their gradients; stellar and gas kinematics; and enclosed gravitational mass as a function of radius. We describe how these science requirements set the depth of the observations and dictate sample selection. The majority of targeted galaxies are selected to ensure uniform spatial coverage in units of effective radius (R e ) while maximizing spatial resolution. About two-thirds of the sample is covered out to 1.5R e (Primary sample), and one-third of the sample is covered to 2.5R e (Secondary sample). We describe the survey execution with details that would be useful in the design of similar future surveys. We also present statistics on the achieved data quality, specifically the point-spread function, sampling uniformity, spectral resolution, sky subtraction, and flux calibration. For our Primary sample, the median r-band signal-to-noise ratio is ∼70 per 1.4 Å pixel for spectra stacked between 1R e and 1.5R e . Measurements of various galaxy properties from the first-year data show that we are meeting or exceeding the defined requirements for the majority of our science goals. 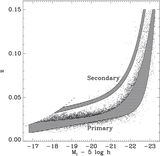