We present the analysis of the first circumbinary planet microlensing event, OGLE-2007-BLG-349. This event has a strong planetary signal that is best fit with a mass ratio of q ≈ 3.4 × 10-4, but there is an additional signal due to an additional lens mass, either another planet or another star. We find acceptable light-curve fits with two classes of models: two-planet models (with a single host star) and circumbinary planet models. The light curve also reveals a significant microlensing parallax effect, which constrains the mass of the lens system to be M L ≈ 0.7 {M}⊙ . Hubble Space Telescope (HST) images resolve the lens and source stars from their neighbors and indicate excess flux due to the star(s) in the lens system. This is consistent with the predicted flux from the circumbinary models, where the lens mass is shared between two stars, but there is not enough flux to be consistent with the two-planet, one-star models. So, only the circumbinary models are consistent with the HST data. They indicate a planet of mass m c = 80 ± 13 {M}\oplus , orbiting a pair of M dwarfs with masses of M A = 0.41 ± 0.07 and M B = 0.30 ± 0.07, which makes this the lowest-mass circumbinary planet system known. The ratio of the separation between the planet and the center of mass to the separation of the two stars is ∼40, so unlike most of the circumbinary planets found by Kepler, the planet does not orbit near the stability limit. 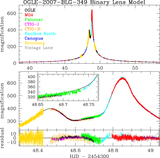