Rotation in the Pleiades with K2. I. Data and First Results

Young (125 Myr), populous (>1000 members), and relatively nearby, the Pleiades has provided an anchor for stellar angular momentum models for both younger and older stars. We used K2 to explore the distribution of rotation periods in the Pleiades. With more than 500 new periods for Pleiades members, we are vastly expanding the number of Pleiades with periods, particularly at the low-mass end. About 92% of the members in our sample have at least one measured spot-modulated rotation period. For the ∼8% of the members without periods, non-astrophysical effects often dominate (saturation, etc.), such that periodic signals might have been detectable, all other things being equal. We now have an unusually complete view of the rotation distribution in the Pleiades. The relationship between P and {(V-{K}{{s}})}0 follows the overall trends found in other Pleiades studies. There is a slowly rotating sequence for 1.1 ≲ {(V-{K}{{s}})}0 ≲ 3.7 and a primarily rapidly rotating population for {(V-{K}{{s}})}0 ≳ 5.0. There is a region in which there seems to be a disorganized relationship between P and {(V-{K}{{s}})}0 for 3.7 ≲ {(V-{K}{{s}})}0 ≲ 5.0. Paper II continues the discussion, focusing on multiperiod structures, and Paper III speculates about the origin and evolution of the period distribution in the Pleiades. 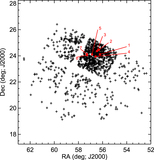