We present the first dedicated radio continuum survey of a Kepler K2 mission field, Field 1, covering the North Galactic Cap. The survey is wide field, contemporaneous, multi-epoch, and multi-resolution in nature and was conducted at low radio frequencies between 140 and 200 MHz. The multi-epoch and ultra wide field (but relatively low resolution) part of the survey was provided by 15 nights of observation using the Murchison Widefield Array (MWA) over a period of approximately a month, contemporaneous with K2 observations of the field. The multi-resolution aspect of the survey was provided by the low resolution (4‧) MWA imaging, complemented by non-contemporaneous but much higher resolution (20″) observations using the Giant Metrewave Radio Telescope (GMRT). The survey is, therefore, sensitive to the details of radio structures across a wide range of angular scales. Consistent with other recent low radio frequency surveys, no significant radio transients or variables were detected in the survey. The resulting source catalogs consist of 1085 and 1468 detections in the two MWA observation bands (centered at 154 and 185 MHz, respectively) and 7445 detections in the GMRT observation band (centered at 148 MHz), over 314 square degrees. The survey is presented as a significant resource for multi-wavelength investigations of the more than 21,000 target objects in the K2 field. We briefly examine our survey data against K2 target lists for dwarf star types (stellar types M and L) that have been known to produce radio flares. 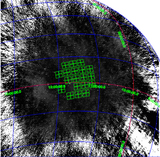