On the basis of the Galactic O Star Spectroscopic Survey (GOSSS), we present a detailed systematic investigation of the O Vz stars. The currently used spectral classification criteria are rediscussed, and the Vz phenomenon is recalibrated through the addition of a quantitative criterion based on the equivalent widths of the He I λ4471, He II λ4542, and He II λ4686 spectral lines. The GOSSS O Vz and O V populations resulting from the newly adopted spectral classification criteria are comparatively analyzed. The locations of the O Vz stars are probed, showing a concentration of the most extreme cases toward the youngest star-forming regions. The occurrence of the Vz spectral peculiarity in a solar-metallicity environment, as predicted by the fastwind code, is also investigated, confirming the importance of taking into account several processes for the correct interpretation of the phenomenon. 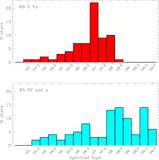