Context. The effects of a planet sculpting the disk from which it formed are most likely to be found in disks that are in transition between being classical protoplanetary and debris disks. Recent direct imaging of transition disks has revealed structures such as dust rings, gaps, and spiral arms, but an unambiguous link between these structures and sculpting planets is yet to be found.
Aims: We aim to find signs of ongoing planet-disk interaction and study the distribution of small grains at the surface of the transition disk around RX J1615.3-3255 (RX J1615).
Methods: We observed RX J1615 with VLT/SPHERE. From these observations, we obtained polarimetric imaging with ZIMPOL (R'-band) and IRDIS (J), and IRDIS (H2H3) dual-band imaging with simultaneous spatially resolved spectra with the IFS (YJ).
Results: We image the disk for the first time in scattered light and detect two arcs, two rings, a gap and an inner disk with marginal evidence for an inner cavity. The shapes of the arcs suggest that they are probably segments of full rings. Ellipse fitting for the two rings and inner disk yield a disk inclination I = 47 ± 2° and find semi-major axes of 1.50 ± 0.01'' (278 au), 1.06 ± 0.01'' (196 au) and 0.30 ± 0.01'' (56 au), respectively. We determine the scattering surface height above the midplane, based on the projected ring center offsets. Nine point sources are detected between 2.1'' and 8.0'' separation and considered as companion candidates. With NACO data we recover four of the nine point sources, which we determine to be not co-moving, and therefore unbound to the system.
Conclusions: We present the first detection of the transition disk of RX J1615 in scattered light. The height of the rings indicate limited flaring of the disk surface, which enables partial self-shadowing in the disk. The outermost arc either traces the bottom of the disk or it is another ring with semi-major axis ≳ 2.35'' (435 au). We explore both scenarios, extrapolating the complete shape of the feature, which will allow us to distinguish between the two in future observations. The most attractive scenario, where the arc traces the bottom of the outer ring, requires the disk to be truncated at r ≈ 360 au. If the closest companion candidate is indeed orbiting the disk at 540 au, then it would be the most likely cause for such truncation. This companion candidate, as well as the remaining four, all require follow up observations to determine if they are bound to the system. 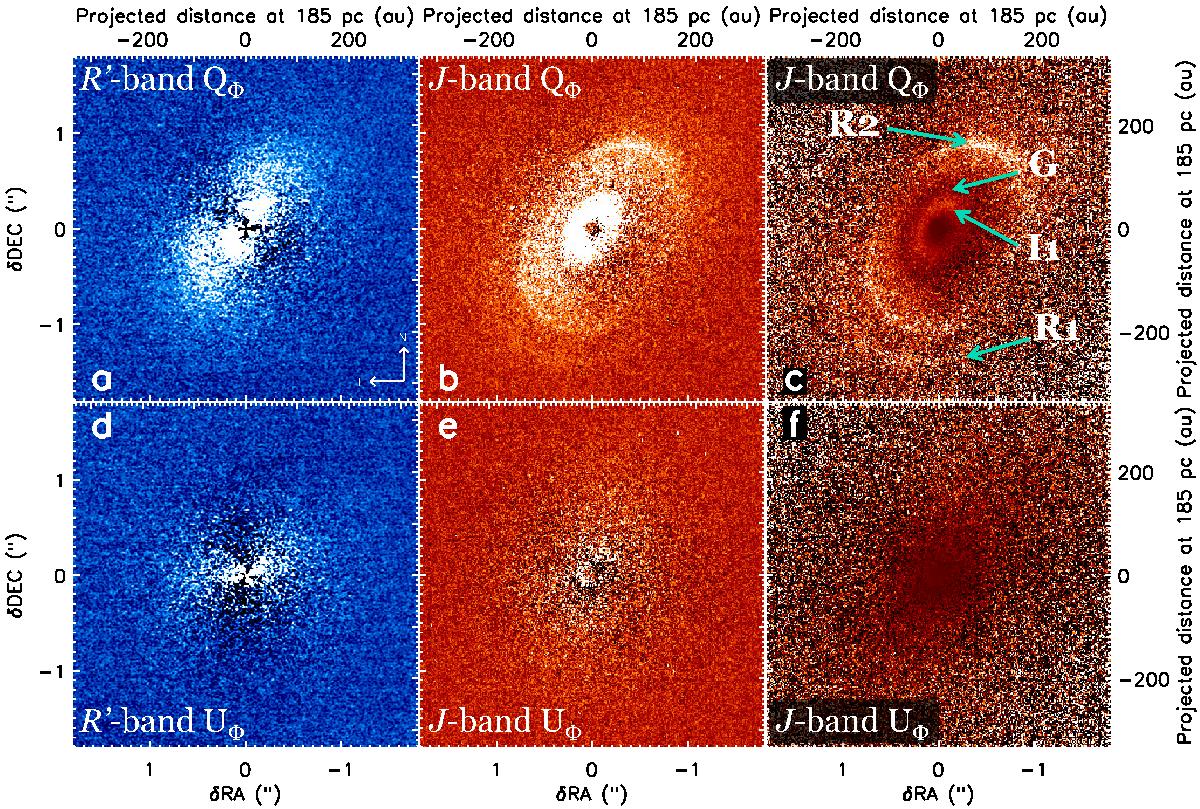