HADES RV program with HARPS-N at the TNG GJ 3998: An early M-dwarf hosting a system of super-Earths

Context. Many efforts are currently made to detect Earth-like planets around low-mass stars in almost every extra-solar planet search. M dwarfs are considered ideal targets for Doppler radial velocity searches because their low masses and luminosities make low-mass planets orbiting in these stars' habitable zones more easily detectable than those around higher mass stars. Nonetheless, the frequency statistics of low-mass planets hosted by low-mass stars remains poorly constrained.
Aims: Our M-dwarf radial velocity monitoring with HARPS-N within the collaboration between the Global architectures of Planetary Systems (GAPS) project, the Institut de Ciències de l'Espai/CSIC-IEEC (ICE) and the Instituto de Astrofísica de Canarias (IAC) can provide a major contribution to the widening of the current statistics through the in-depth analysis of accurate radial velocity observations in a narrow range of spectral sub-types (79 stars, between dM0 to dM3). Spectral accuracy will enable us to reach the precision needed to detect small planets with a few Earth masses. Our survey will contribute to the surveys devoted to the search for planets around M-dwarfs, mainly focused on the M-dwarf population of the northern emisphere, for which we will provide an estimate of the planet occurrence.
Methods: We present here a long-duration radial velocity monitoring of the M1 dwarf star with HARPS-N to identify periodic signals in the data. Almost simultaneous photometric observations were carried out within the APACHE and EXORAP programs to characterize the stellar activity and to distinguish those due to activity and to the presence of planetary companions from the periodic signals. We ran a Markov chain Monte Carlo simulation and used a Bayesian model selection to determine the number of planets in this system, to estimate their orbital parameters and minimum mass, and to properly treat the activity noise.
Results: The radial velocities have a dispersion in excess of their internal errors due to at least four superimposed signals with periods of 30.7, 13.7, 42.5, and 2.65 days. Our data are well described by a two-planet Keplerian (13.7 d and 2.65 d) and a fit with two sinusoidal functions (stellar activity, 30.7 d and 42.5 d). The analysis of spectral indexes based on Ca II H & K and Hα lines demonstrates that the periods of 30.7 and 42.5 days are due to chromospheric inhomogeneities modulated by stellar rotation and differential rotation. This result is supported by photometry and is consistent with the results on differential rotation of M stars obtained with Kepler. The shorter periods of 13.74 ± 0.02 d and 2.6498 ± 0.0008 d are well explained with the presence of two planets, with masses of at least 6.26-0.76+0.79 M⊕ and 2.47 ± 0.27 M⊕ and distances of 0.089 AU and 0.029 AU from the host, respectively. 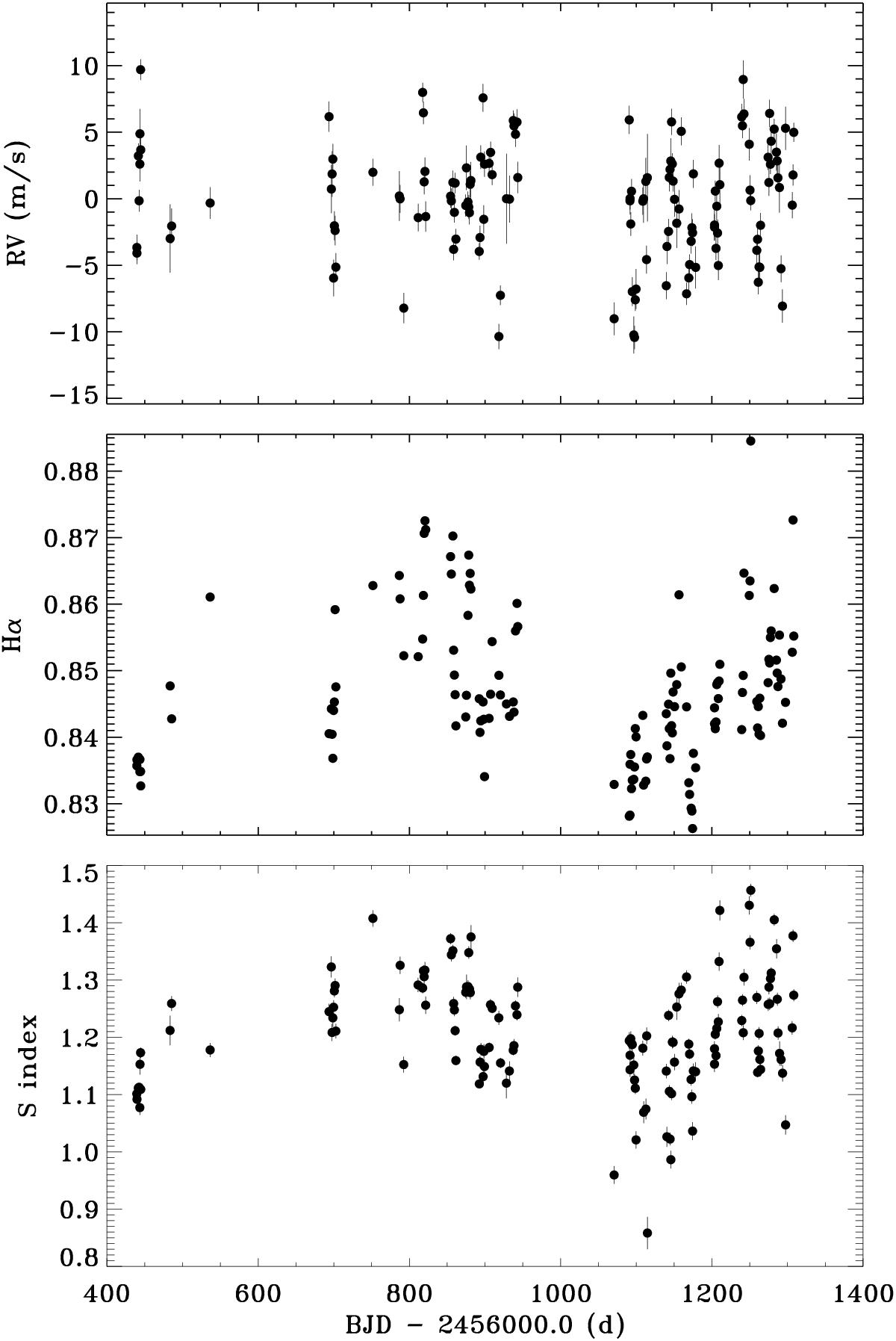