The search of extragalactic regions with conspicuous presence of Wolf-Rayet (WR) stars outside the Local Group is challenging task owing to the difficulty in detecting their faint spectral features. In this exploratory work, we develop a methodology to perform an automated search of WR signatures through a pixel-by-pixel analysis of integral field spectroscopy (IFS) data belonging to the Calar Alto Legacy Integral Field Area survey, CALIFA. This procedure has been applied to a sample of nearby galaxies spanning a wide range of physical, morphological, and environmental properties. This technique allowed us to build the first catalogue of regions rich in WR stars with spatially resolved information, and enabled us to study the properties of these complexes in a two-dimensional (2D) context. The detection technique is based on the identification of the blue WR bump (around He IIλ4686 Å, mainly associated with nitrogen-rich WR stars; WN) and the red WR bump (around C ivλ5808 Å, mainly associated with carbon-rich WR stars; WC) using a pixel-by-pixel analysis that maximizes the number of independent regions within a given galaxy. We identified 44 WR-rich regions with blue bumps distributed in 25 out of a total of 558 galaxies. The red WR bump was identified only in 5 of those regions. Most of the WR regions are located within one effective radius from the galaxy centre, and around one-third are located within ~1 kpc or less from the centre. We found that the majority of the galaxies hosting WR populations in our sample are involved in some kind of interaction process. Half of the host galaxies share some properties with gamma-ray burst (GRB) hosts where WR stars, such as potential candidates to the progenitors of GRBs, are found. We also compared the WR properties derived from the CALIFA data with stellar population synthesis models, and confirm that simple star models are generally not able to reproduce the observations. We conclude that other effects, such as binary star channel (which could extend theWR phase up to 10 Myr), fast rotation, or other physical processes that cause the loss of observed Lyman continuum photons, very likely affect the derived WR properties, and hence should be considered when modelling the evolution of massive stars.

Based on observations collected at the Centro Astronómico Hispano-Alemán (CAHA) at Calar Alto, operated jointly by the Max-Planck Institut für Astronomie and the Instituto de Astrofísica de Andalucía (CSIC). 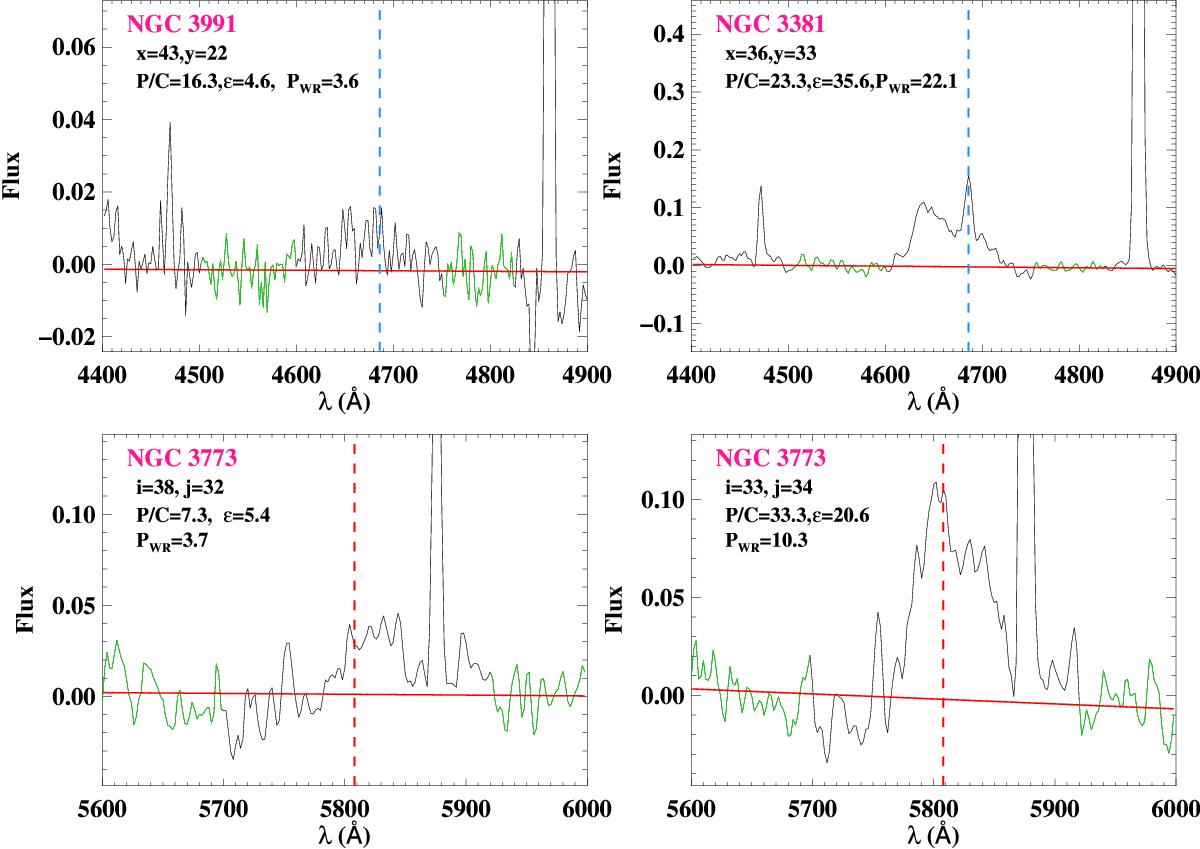