Context. Atomic fine-structure line emission is a major cooling process in the interstellar medium (ISM). In particular the [C II] 158 μm line is one of the dominant cooling lines in photon-dominated regions (PDRs). However, it is not confined to PDRs but can also originate from the ionized gas closely surrounding young massive stars. The proportion of the [C II] emission from H II regions relative to that from PDRs can vary significantly.
Aims: We investigate the question of how much of the [C II] emission in the nucleus of the nearby spiral galaxy IC 342 is contributed by PDRs and by the ionized gas. We examine the spatial variations of starburst/PDR activity and study the correlation of the [C II] line with the [N II] 205 μm emission line coming exclusively from the H II regions.
Methods: We present small maps of [C II] 158 μm and [N II] 205 μm lines recently observed with the GREAT receiver on board SOFIA. We present different methods to utilize the superior spatial and spectral resolution of our new data to infer information on how the gas kinematics in the nuclear region influence the observed line profiles. In particular we present a super-resolution method to derive how unresolved, kinematically correlated structures in the beam contribute to the observed line shapes.
Results: We find that the emission coming from the ionized gas shows a kinematic component in addition to the general Doppler signature of the molecular gas. We interpret this as the signature of two bi-polar lobes of ionized gas expanding out of the galactic plane. We then show how this requires an adaptation of our understanding of the geometrical structure of the nucleus of IC 342. Examining the starburst activity we find ratios I( [C II] ) /I(12CO(1-0)) between 400 and 1800 in energy units. Applying predictions from numerical models of H II and PDR regions to derive the contribution from the ionized phase to the total [C II] emission we find that 35-90% of the observed [C II] intensity stems from the ionized gas if both phases contribute. Averaged over the central few hundred parsec we find for the [C II] contribution a H II-to-PDR ratio of 70:30.
Conclusions: The ionized gas in the center of IC 342 contributes more strongly to the overall [C II] emission than is commonly observed on larger scales and than is predicted. Kinematic analysis shows that the majority of the [C II] emission is related to the strong but embedded star formation in the nuclear molecular ring and only marginally emitted from the expanding bi-polar lobes of ionized gas. 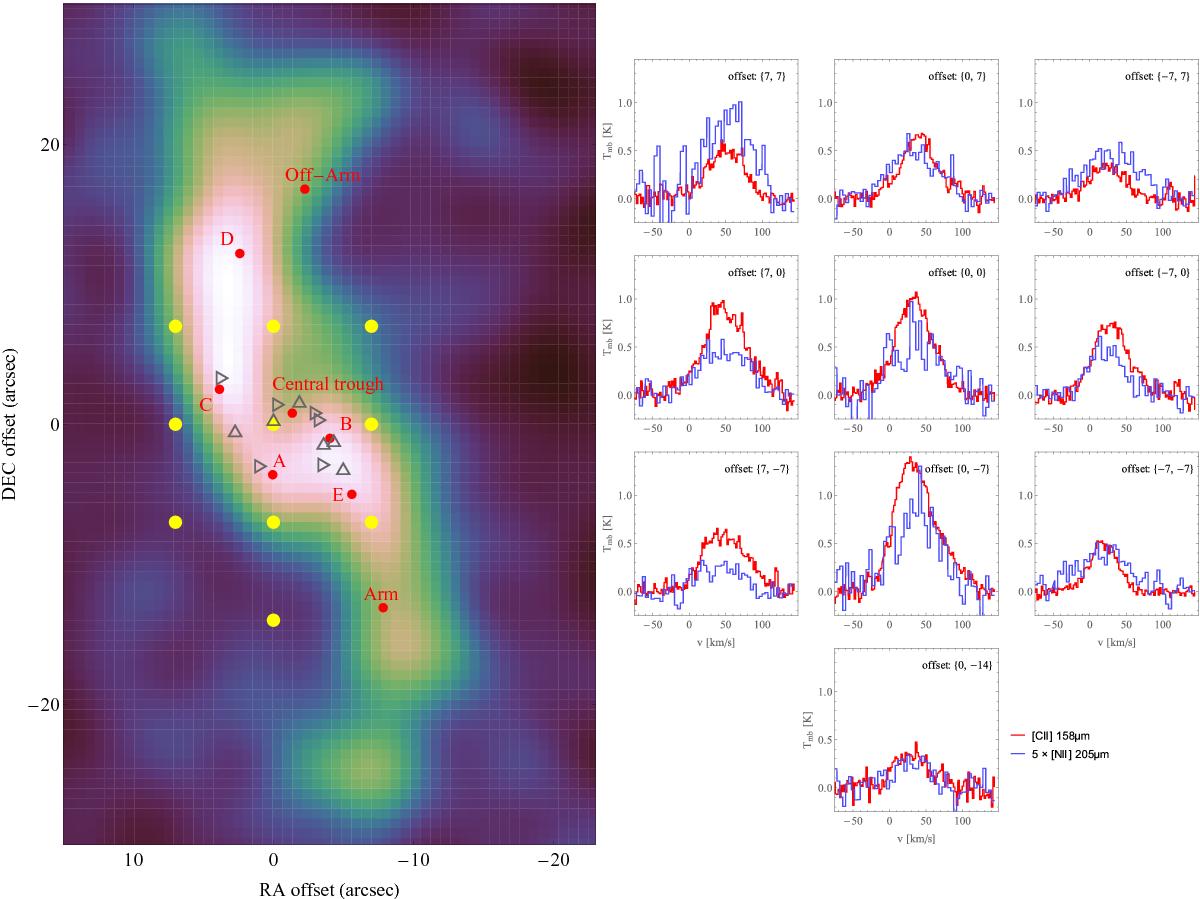