Aims: We present a multiwavelength analysis of 20 EUV jets which occurred at the periphery of active regions close to sunspots. We discuss the physical parameters of the jets and their relation with other phenomena such as Hα surges, nonthermal type-III radio bursts and hard X-ray (HXR) emission.
Methods: These jets were observed between August 2010 and June 2013 by the Atmospheric Imaging Assembly (AIA) instrument that is onboard the Solar Dynamic Observatory (SDO). We selected events that were observed on the solar disk within +/-60° latitude. Using AIA wavelength channels that are sensitive to coronal temperatures, we studied the temperature distribution in the jets using the line of sight (LOS) differential emission measure (DEM) technique. We also investigated the role of the photospheric magnetic field using the LOS magnetogram data from the Helioseismic and Magnetic Imager (HMI) onboard SDO.
Results: It has been observed that most of the jets originated from the western periphery of active regions. Their lifetimes range from 5 to 39 min with an average of 18 min and their velocities range from 87 to 532 km s-1 with an average of 271 km s-1. All the jets are co-temporally associated with Hα surges. Most of the jets are co-temporal with nonthermal type-III radio bursts observed by the Wind/WAVES spacecraft in the frequency range from 20 kHz to 13 MHz. We confirm the source region of these bursts using the potential field source surface (PFSS) technique. Using Reuven Ramaty High Energy Solar Spectroscopic Imager (RHESSI) observations, we found that half of the jets produced HXR emission and they often shared the same source region as the HXR emission (6-12 keV). Ten out of 20 events showed that the jets originated in a region of flux cancellation and six jets in a region of flux emergence. Four events showed flux emergence and then cancellation during the jet evolution. DEM analyses showed that for most of the spires of the jets, the DEM peaked at around log T [K] = 6.2/6.3 (~2 MK). In addition, we derived an emission measure and a lower limit of electron density at the location of the spire (jet 1: log EM = 28.6, Ne = 1.3 × 1010 cm-3; jet 2: log EM = 28.0, Ne = 8.6 × 109 cm-3) and the footpoint (jet 1 - log EM = 28.6, Ne = 1.1 × 1010 cm-3; jet 2: log EM = 28.1, Ne = 8.4 × 109 cm-3). These results are in agreement with those obtained earlier by studying individual active region jets.
Conclusions: The observation of flux cancellation, the association with HXR emission and emission of nonthermal type-III radio bursts, suggest that the initiation and therefore, heating is taking place at the base of the jet. This is also supported by the high temperature plasma revealed by the DEM analysis in the jet footpoint (peak in the DEM at log T [K] = 6.5). Our results provide substantial constraints for theoretical modeling of the jets and their thermodynamic nature.

Movies are available in electronic form at http://www.aanda.org 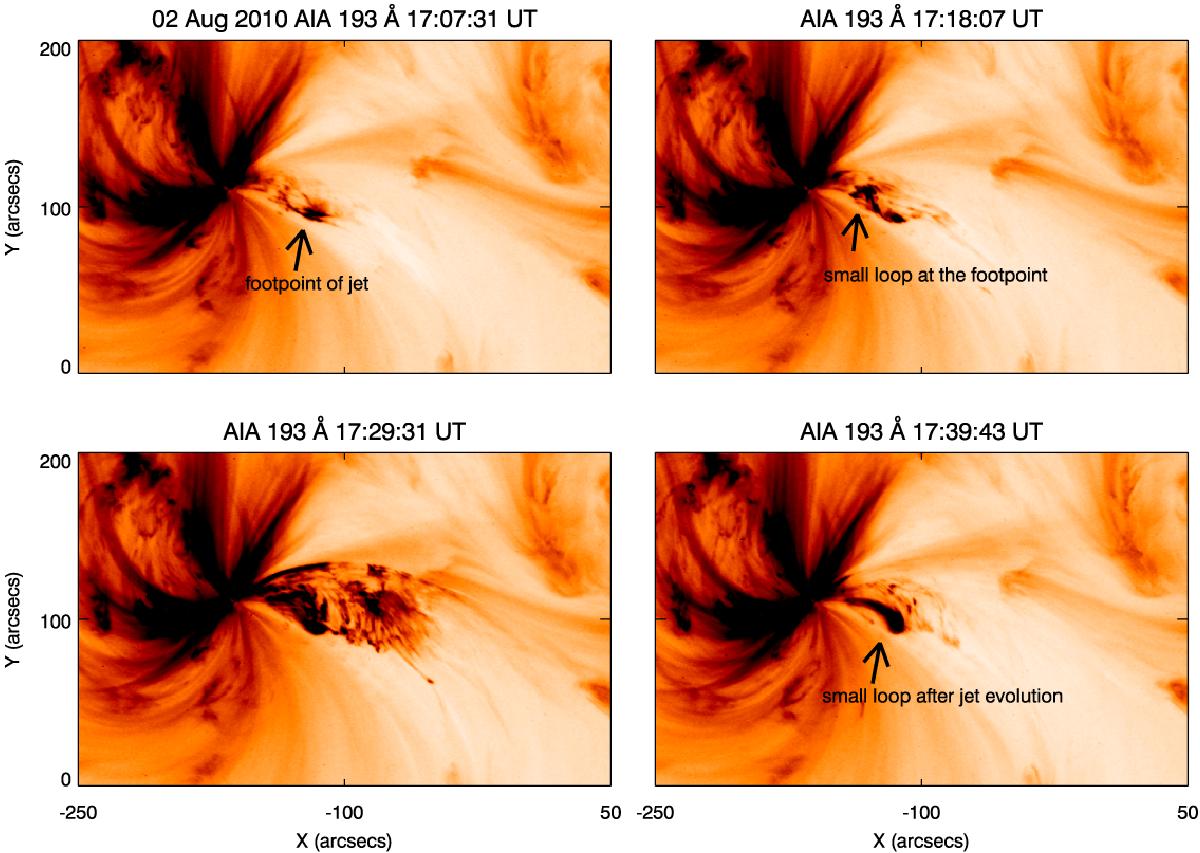