Context. The morphological, spectroscopic, and kinematical properties of the warm interstellar medium (wim) in early-type galaxies (ETGs) hold key observational constraints to nuclear activity and the buildup history of these massive, quiescent systems. High-quality integral field spectroscopy (IFS) data with a wide spectral and spatial coverage, such as those from the CALIFA survey, offer an unprecedented opportunity for advancing our understanding of the wim in ETGs.
Aims: This article centers on a 2D investigation of the wim component in 32 nearby (≲150 Mpc) ETGs from CALIFA, complementing a previous 1D analysis of the same sample.
Methods: The analysis presented here includes Hα intensity and equivalent width (EW) maps and radial profiles, diagnostic emission-line ratios, and ionized-gas and stellar kinematics. It is supplemented by τ-ratio maps, which are a more efficient means to quantify the role of photoionization by the post-AGB stellar component than alternative mechanisms (e.g., AGN, low-level star formation).
Results: Confirming and strengthening our previous conclusions, we find that ETGs span a broad continuous sequence in the properties of their wim, exemplified by two characteristic classes. The first (type I) comprises systems with a nearly constant EW(Hα) in their extranuclear component, which quantitatively agrees with (but is no proof of) the hypothesis that photoionization by the post-AGB stellar component is the main driver of extended wim emission. The second class (type II) stands for virtually wim-evacuated ETGs with a very low (≤0.5 Å), outwardly increasing EW(Hα). These two classes appear indistinguishable from one another by their LINER-specific emission-line ratios in their extranuclear component. Here we extend the tentative classification we proposed previously by the type I+, which is assigned to a subset of type I ETGs exhibiting ongoing low-level star-forming activity in their periphery. This finding along with faint traces of localized star formation in the extranuclear component of several of our sample galaxies points to a non-negligible contribution by OB stars to the global ionizing photon budget in ETGs. Additionally, our data again highlight the diversity of ETGs in their gaseous and stellar kinematics. While in one half of our sample, gas and stars show similar (yet not necessarily identical) velocity patterns that are both dominated by rotation along the major galaxy axis, our analysis also documents several cases of kinematical decoupling between gas and stars, or rotation along the minor galaxy axis. We point out that the generally very low (≲1 Å) EW(Hα) of ETGs requires a careful quantitative assessment of potential observational and analysis biases in studies of their wim. With standard emission-line fitting tools, Balmer emission lines become progressively difficult to detect below an EW(Hα) ~ 3 Å, therefore our current understanding of the presence and 2D emission patterns and kinematics of the diffuse wim ETGs may be severely incomplete. We demonstrate that at the typical emission-line detection threshold of ~2 Å in previous studies, most of the extranuclear wim emission in an ETG may evade detection, which could in turn cause ETGs to be classified as entirely gas-devoid systems.
Conclusions: This study adds further observational evidence for a considerable heterogeneity among ETGs with regard to the physical properties and 2D kinematics of their extended wim component, and it clearly shows that a comprehensive understanding of these systems requires IFS studies over their entire optical extent. 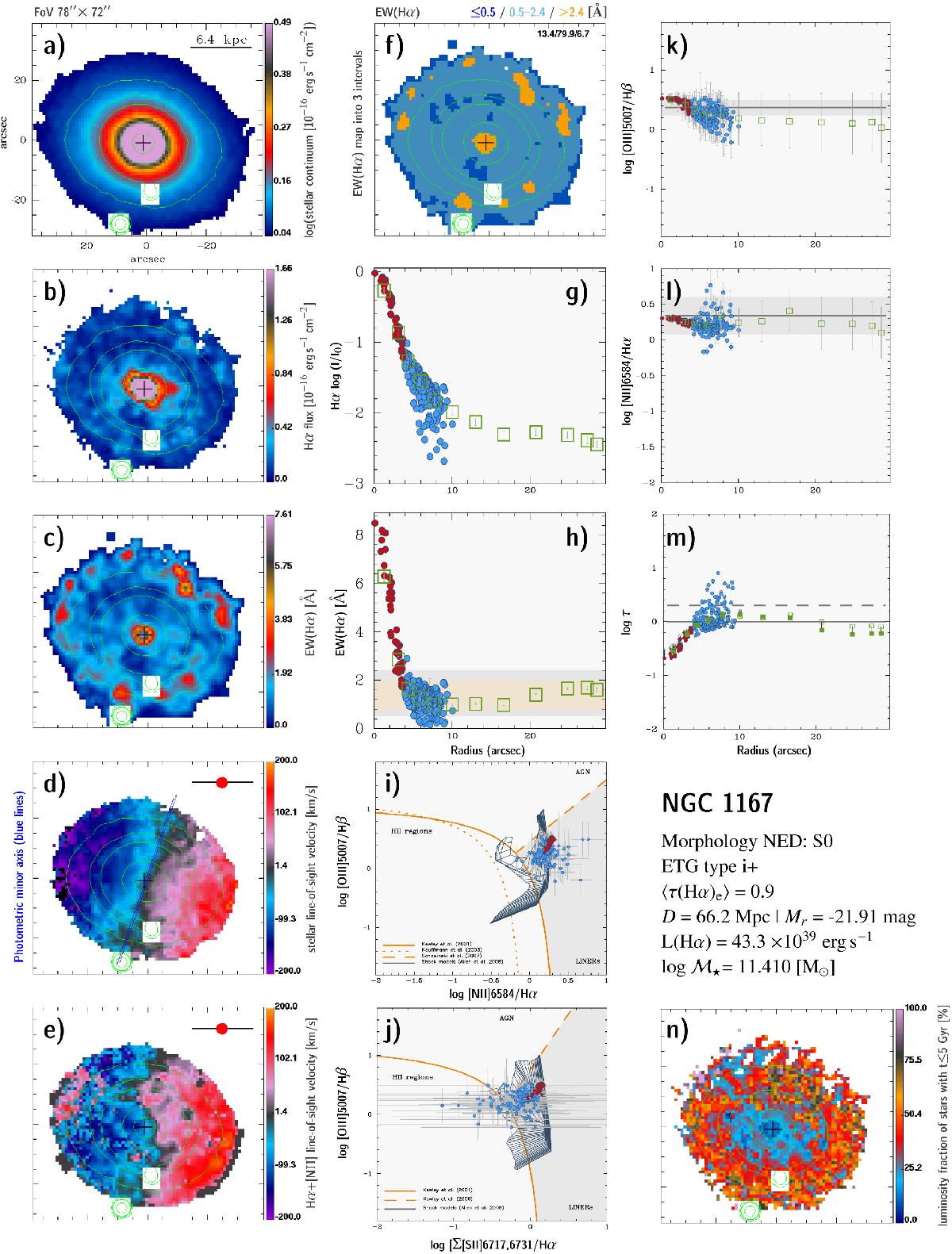