The role of binaries in the enrichment of the early Galactic halo. III. Carbon-enhanced metal-poor stars - CEMP-s stars

Context. Detailed spectroscopic studies of metal-poor halo stars have highlighted the important role of carbon-enhanced metal-poor (CEMP) stars in understanding the early production and ejection of carbon in the Galaxy and in identifying the progenitors of the CEMP stars among the first stars formed after the Big Bang. Recent work has also classified the CEMP stars by absolute carbon abundance, A(C), into high- and low-C bands, mostly populated by binary and single stars, respectively.
Aims: Our aim is to determine the frequency and orbital parameters of binary systems among the CEMP-s stars, which exhibit strong enhancements of neutron-capture elements associated with the s-process. This allows us to test whether local mass transfer from a binary companion is necessary and sufficient to explain their dramatic carbon excesses.
Methods: We have systematically monitored the radial velocities of a sample of 22 CEMP-s stars for several years with ~monthly, high-resolution, low S/N échelle spectra obtained at the Nordic Optical Telescope (NOT) at La Palma, Spain. From these spectra, radial velocities with an accuracy of ≈100 m s-1 were determined by cross-correlation with optimised templates.
Results: Eighteen of the 22 stars exhibit clear orbital motion, yielding a binary frequency of 82 ± 10%, while four stars appear to be single (18 ± 10%). We thus confirm that the binary frequency of CEMP-s stars is much higher than for normal metal-poor giants, but not 100% as previously claimed. Secure orbits are determined for eleven of the binaries and provisional orbits for six long-period systems (P > 3000 days), and orbital circularisation timescales are discussed.
Conclusions: The conventional scenario of local mass transfer from a former asymptotic giant branch (AGB) binary companion does appear to account for the chemical composition of most CEMP-s stars. However, the excess of C and s-process elements in some single CEMP-s stars was apparently transferred to their natal clouds by an external (distant) source. This finding has important implications for our understanding of carbon enrichment in the early Galactic halo and some high-redshift damped lyman alpha (DLA) systems, and of the mass loss from extremely metal-poor AGB stars. 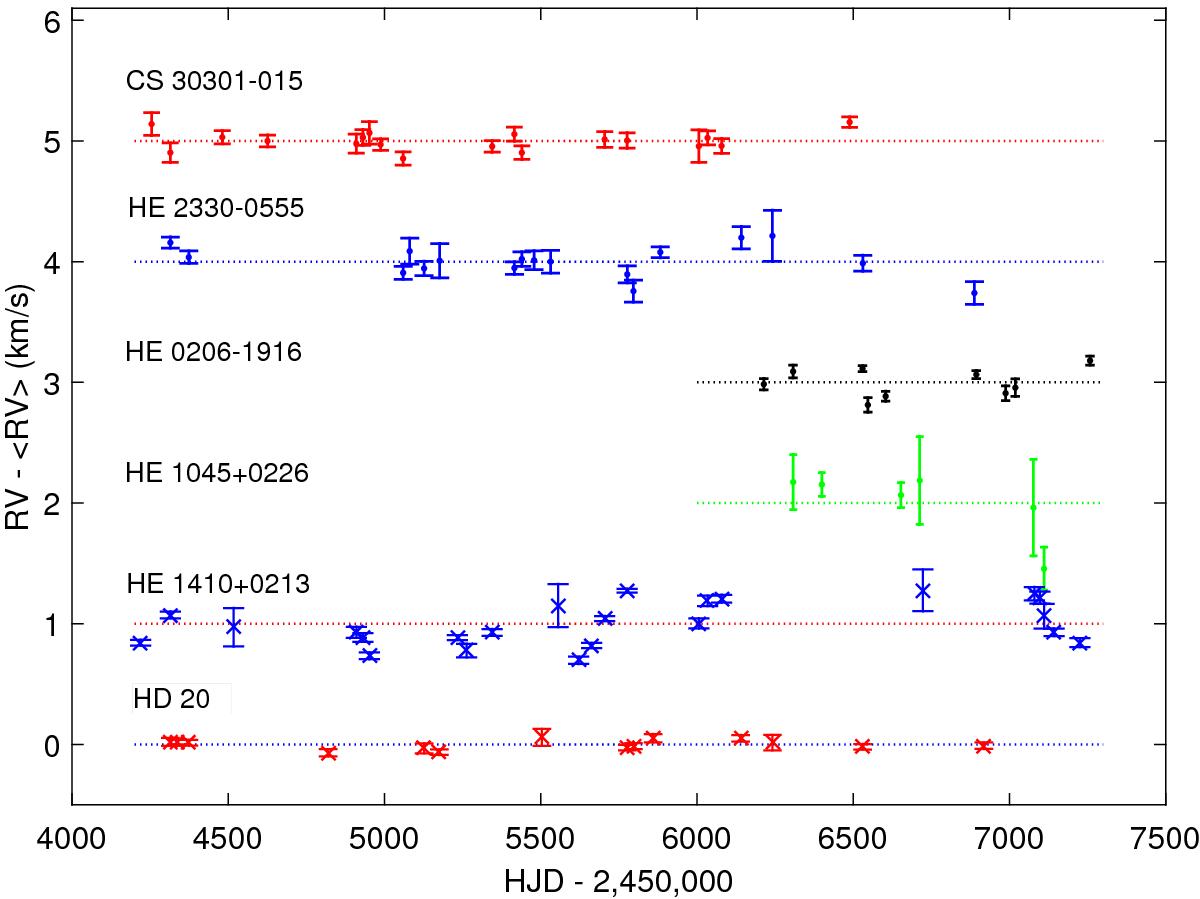