Context. Extreme UV (EUV) and X-ray loops in the solar corona connect regions of enhanced magnetic activity, but they are not usually rooted in the dark umbrae of sunspots because the strong magnetic field found there suppresses convection. This means that the Poynting flux of magnetic energy into the upper atmosphere is not significant within the umbra as long as there are no light bridges or umbral dots.
Aims: Here we report a rare observation of a coronal loop rooted in the dark umbra of a sunspot without any traces of light bridges or umbral dots. This allows us to investigate the loop without much confusion from background or line-of-sight integration effects.
Methods: We used the slit-jaw images and spectroscopic data from the Interface Region Imaging Spectrograph (IRIS) and concentrate on the line profiles of O iv and Si iv that show persistent strong redshifted components in the loop rooted in the umbra. Using the ratios of O iv, we can estimate the density and thus investigate the mass flux. The coronal context and temperature diagnostics of these observations is provided through the EUV channels of the Atmospheric Imaging Assembly (AIA).
Results: The coronal loop, embedded within cooler downflows, hosts supersonic downflows. The speed of more than 100 km s-1 is on the same order of magnitude in the transition region lines of O iv and Si iv, and is even seen at comparable speed in the chromospheric Mg II lines. At a projected distance of within 1'' of the footpoint, we see a shock transition to smaller downflow speeds of about 15 km s-1 being consistent with mass conservation across a stationary isothermal shock.
Conclusions: We see no direct evidence for energy input into the loop because the loop is rooted in the dark uniform part of the umbra with no light bridges or umbral dots near by. Thus one might conclude that we are seeing a siphon flow driven from the footpoint at the other end of the loop. However, for a final result data of similar quality at the other footpoint are needed, but this is too far away to be covered by the IRIS field of view. 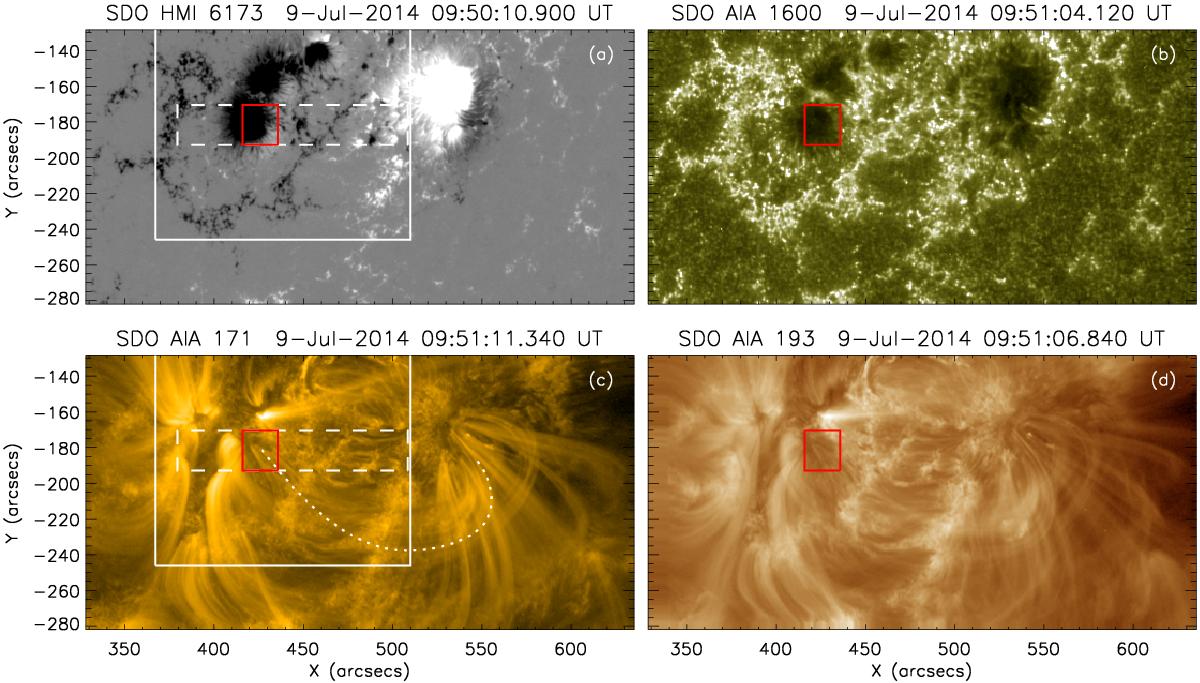