Context. Obscured active galactic nuclei (AGNs) are thought to be very common in the Universe. Observations and surveys have shown that the number of sources increases for near galaxies and at the low-luminosity regime (the so-called LLAGNs). Furthermore, many AGNs show changes in their obscuration properties at X-rays that may suggest a configuration of clouds very close to the accretion disk. However, these variations could also be due to changes in the intrinsic continuum of the source. It is therefore important to study nearby AGN to better understand the locus and distribution of clouds in the neighbourhood of the nucleus.
Aims: We aim to study the nuclear obscuration of LLAGN NGC 835 and its extended emission using mid-infrared observations.
Methods: We present sub-arcsecond-resolution mid-infrared 11.5 μm imaging of the LLAGN galaxy NGC 835 obtained with the instrument CanariCam in the Gran Telescopio CANARIAS (GTC), archival Spitzer/IRS spectroscopy, and archival Chandra data observed in 2000, 2008, and 2013.
Results: The GTC/CanariCam 11.5 μm image reveals faint extended emission out to ~6 arcsec. We obtained a nuclear flux of F(11.5 μm) ~ 18 mJy, whereas the extended emission accounts for 90% of the total flux within the 6 arcsec. This means that the low angular resolution (~4 arcsec) IRS spectrum is dominated by this extended emission and not by the AGN. This is clearly seen in the Spitzer/IRS spectrum, which resembles that of star-forming galaxies. Although the extended soft X-ray emission shows some resemblance with that of the mid-infrared, the knots seen at X-rays are mostly located in the inner side of this mid-infrared emission. The nuclear X-ray spectrum of the source has undergone a spectral change between 2000/2008 and 2013. We argue that this variation is most probably due to changes in the hydrogen column density from ~8 × 1023 cm-2 to ~3 × 1023 cm-2. NGC 835 therefore is one of the few LLAGN, together with NGC 1052, in which changes in the absorber can be claimed. 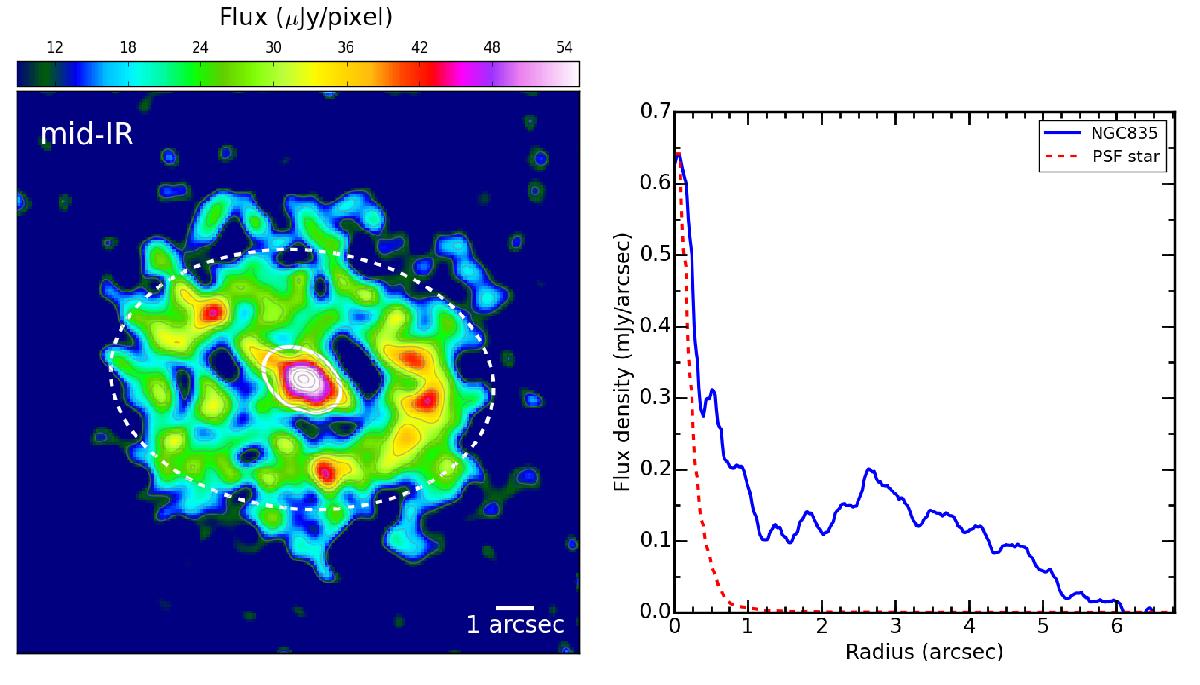