The VLT/NaCo large program to probe the occurrence of exoplanets and brown dwarfs at wide orbits . III. The frequency of brown dwarfs and giant planets as companions to solar-type stars

Context. In recent years there have been many attempts to characterize the occurrence and distribution of stellar, brown dwarf (BD), and planetary-mass companions to solar-type stars with the aim of constraining formation mechanisms. From radial velocity observations a dearth of companions with masses between 10-40 MJupiter has been noticed at close separations, suggesting the possibility of a distinct formation mechanism for objects above and below this range.
Aims: We present a model for the substellar companion mass function (CMF). This model consists of the superposition of the planet and BD companion mass distributions, assuming that we can extrapolate the radial velocity measured CMF for planets to larger separations and the stellar companion mass-ratio distribution over all separations into the BD mass regime. By using both the results of the VLT/NaCo large program (NaCo-LP) and the complementary archive datasets, which probe the occurrence of planets and BDs on wide orbits around solar-type stars, we place some constraints on the planet and BD distributions.
Methods: We developed a Monte Carlo simulation tool to predict the outcome of a given survey, depending on the shape of the orbital parameter distributions (mass, semimajor axis, eccentricity, and inclination). Comparing the predictions with the results of the observations, we calculate the likelihood of different models and which models can be ruled out.
Results: Current observations are consistent with the proposed model for the CMF, as long as a sufficiently small outer truncation radius (≲100 AU) is introduced for the planet separation distribution. Some regions of parameter space can be excluded by the observations.
Conclusions: We conclude that the results of the direct imaging surveys searching for substellar companions around Sun-like stars are consistent with a combined substellar mass spectrum of planets and BDs. This mass distribution has a minimum between 10 and 50 MJupiter, in agreement with radial velocity measurements. In this picture the dearth of objects in this mass range would naturally arise from the shape of the mass distribution, without the introduction of any distinct formation mechanism for BDs. This kind of model for the CMF allows us to determine the probability for a substellar companion as a function of mass to have formed in a disk or from protostellar core fragmentation, as such mechanisms overlap in this mass range. 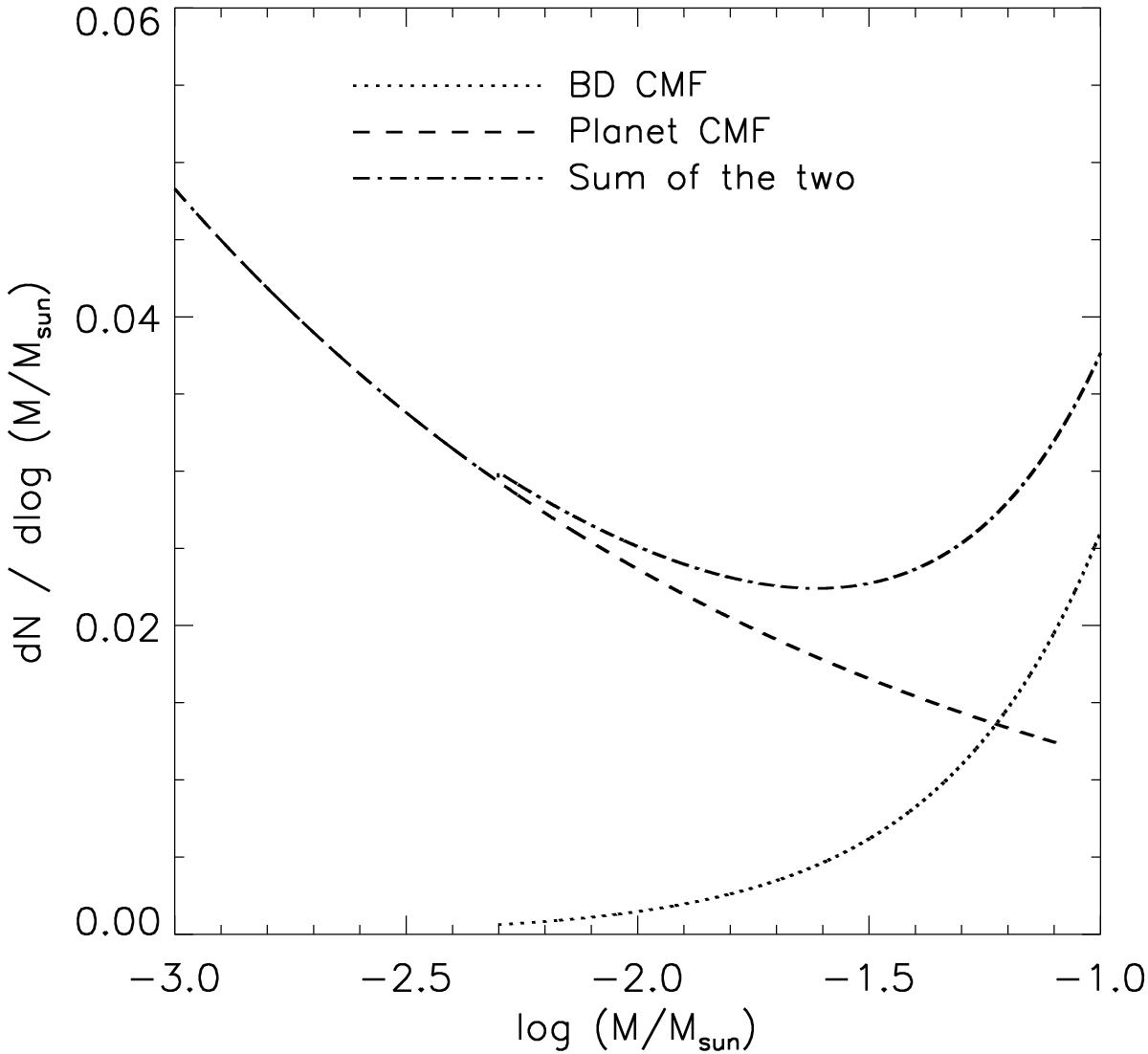