Chemistry in disks. X. The molecular content of protoplanetary disks in Taurus


Aims: We attempt to determine the molecular composition of disks around young low-mass stars.
Methods: We used the IRAM 30 m radio telescope to perform a sensitive wideband survey of 30 stars in the Taurus Auriga region known to be surrounded by gaseous circumstellar disks. We simultaneously observed HCO+(3-2), HCN(3-2), C2H(3-2), CS(5-4), and two transitions of SO. We combined the results with a previous survey that observed 13CO (2-1), CN(2-1), two o-H2CO lines, and another transition of SO. We used available interferometric data to derive excitation temperatures of CN and C2H in several sources. We determined characteristic sizes of the gas disks and column densities of all molecules using a parametric power-law disk model. Our study is mostly sensitive to molecules at 200-400 au from the stars. We compared the derived column densities to the predictions of an extensive gas-grain chemical disk model under conditions representative of T Tauri disks.
Results: This survey provides 20 new detections of HCO+ in disks, 18 in HCN, 11 in C2H, 8 in CS, and 4 in SO. HCO+ is detected in almost all sources and its J = 3-2 line is essentially optically thick, providing good estimates of the disk radii. The other transitions are (at least partially) optically thin. Large variations of the column density ratios are observed, but do not correlate with any specific property of the star or disk. Disks around Herbig Ae stars appear less rich in molecules than those around T Tauri stars, although the sample remains small. SO is only found in the (presumably younger) embedded objects, perhaps reflecting an evolution of the S chemistry due to increasing depletion with time. Overall, the molecular column densities, and in particular the CN/HCN and CN/C2H ratios, are well reproduced by gas-grain chemistry in cold disks.
Conclusions: This study provides a comprehensive census of simple molecules in disks of radii >200-300 au. Extending that to smaller disks, or searching for less abundant or more complex molecules requires a much more sensitive facility, I.e., NOEMA and ALMA.

Based on observations carried out with the IRAM 30 m radio telescope and Plateau de Bure interferometers. IRAM is supported by INSU/CNRS (France), MPG (Germany), and IGN (Spain). 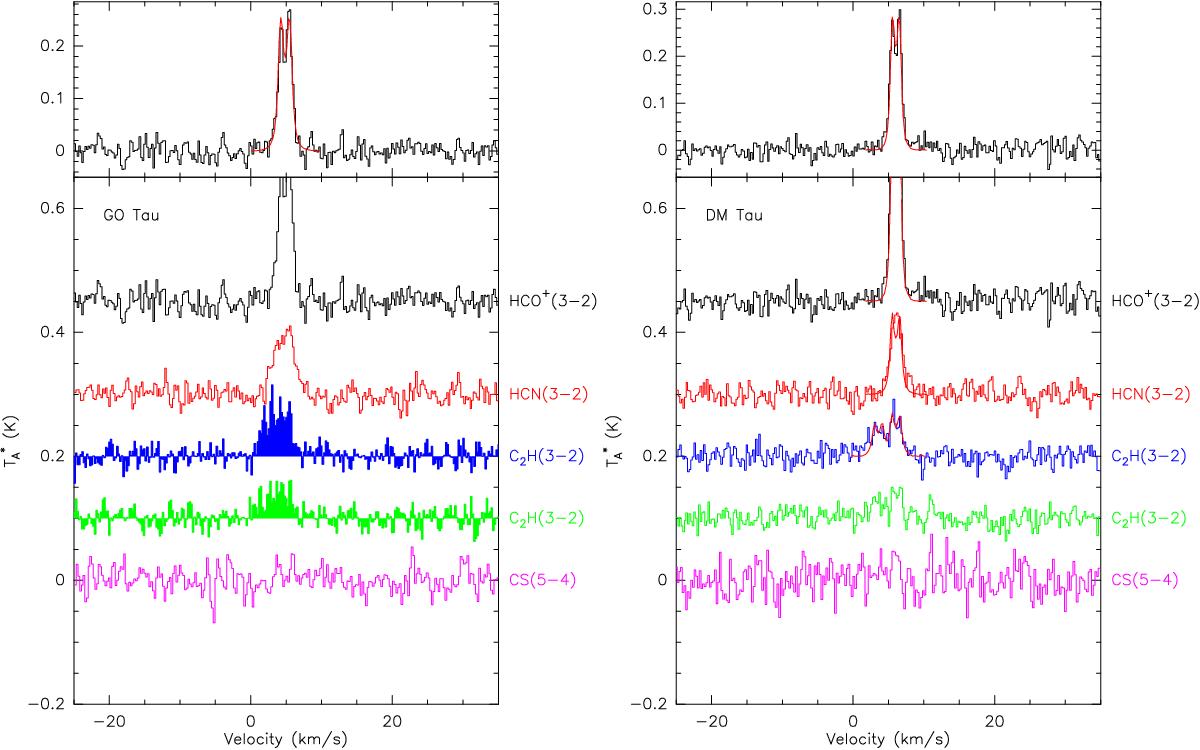