The spatially resolved stellar population content of today's galaxies holds important information for understanding the different processes that contribute to the star formation and mass assembly histories of galaxies. The aim of this paper is to characterize the radial structure of the star formation rate (SFR) in galaxies in the nearby Universe as represented by a uniquely rich and diverse data set drawn from the CALIFA survey. The sample under study contains 416 galaxies observed with integral field spectroscopy, covering a wide range of Hubble types and stellar masses ranging from M⋆ ~ 109 to 7 × 1011 M⊙. Spectral synthesis techniques are applied to the datacubes to derive 2D maps and radial profiles of the intensity of the star formation rate in the recent past (ΣSFR), as well as related properties, such as the local specific star formation rate (sSFR), defined as the ratio between ΣSFR and the stellar mass surface density (μ⋆). To emphasize the behavior of these properties for galaxies that are on and off the main sequence of star formation (MSSF), we stack the individual radial profiles in seven bins of galaxy morphology (E, S0, Sa, Sb, Sbc, Sc, and Sd), and several stellar masses. Our main results are: (a) the intensity of the star formation rate shows declining profiles that exhibit very small differences between spirals with values at R = 1 half light radius (HLR) within a factor two of ΣSFR ~ 20 M⊙Gyr-1pc-2. The dispersion in the ΣSFR(R) profiles is significantly smaller in late type spirals (Sbc, Sc, Sd). This confirms that the MSSF is a sequence of galaxies with nearly constant ΣSFR. (b) sSFR values scale with Hubble type and increase radially outward with a steeper slope in the inner 1 HLR. This behavior suggests that galaxies are quenched inside-out and that this process is faster in the central, bulge-dominated part than in the disks. (c) As a whole and at all radii, E and S0 are off the MSSF with SFR much smaller than spirals of the same mass. (d) Applying the volume corrections for the CALIFA sample, we obtain a density of star formation in the local Universe of ρSFR = (0.0105 ± 0.0008) M⊙yr-1Mpc-3, in agreement with independent estimates. Most of the star formation is occurring in the disks of spirals. (e) The volume-averaged birthrate parameter, which measures the current SFR with respect to its lifetime average, b' = 0.39 ± 0.03, suggests that the present day Universe is forming stars a about one-third of its past average rate. E, S0, and the bulge of early type spirals (Sa, Sb) contribute little to the recent SFRof the Universe, which is dominated by the disks of Sbc, Sc, and Sd spirals. (f) There is a tight relation between ΣSFR and μ⋆, defining a local MSSF relation with a logarithmic slope of 0.8, similar to the global MSSF relation between SFR and M⋆. This suggests that local processes are important in determining the star formation in disks, probably through a density dependence of the SFR law. The scatter in the local MSSF is driven by morphology-related offsets, with ΣSFR/μ⋆ (the local sSFR) increasing from early to late type galaxies, indicating that the shut down of the star formation is more related to global processes, such as the formation of a spheroidal component. 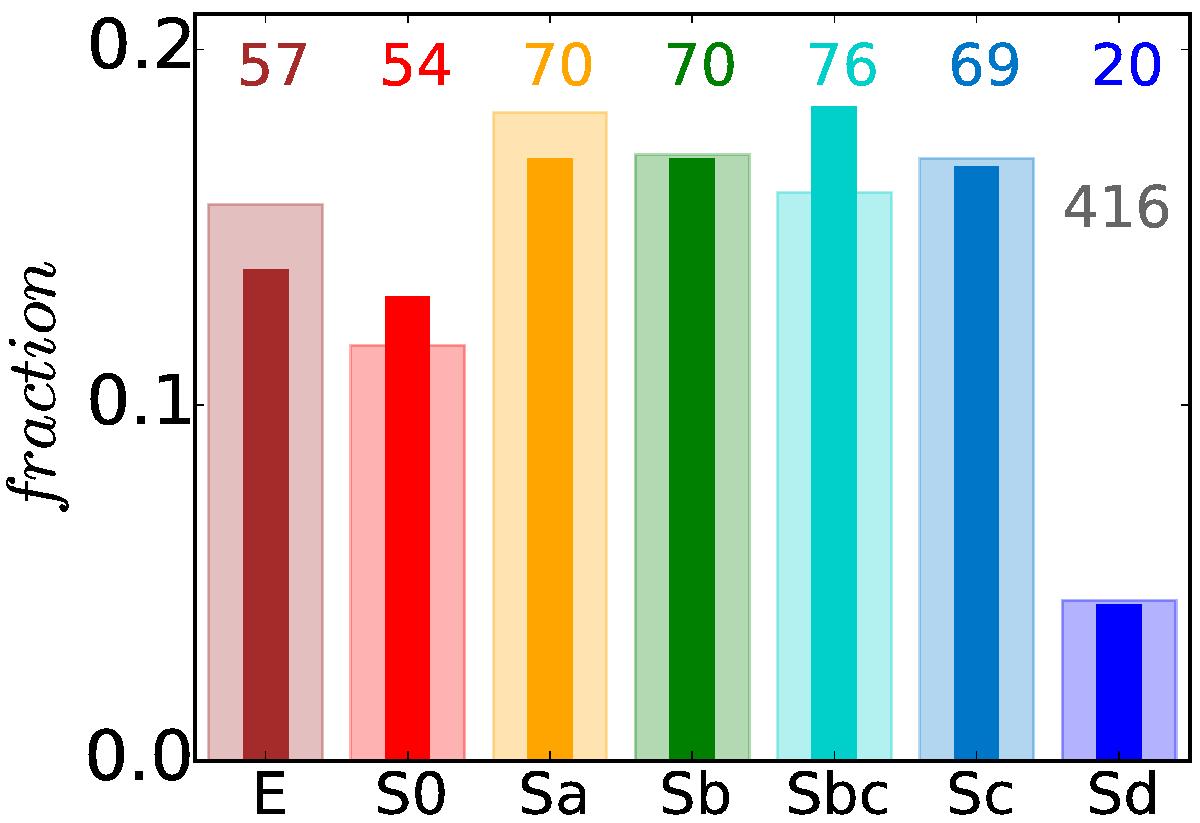