The Hydra I cluster core. I. Stellar populations in the cD galaxy NGC 3311

Context. The history of the mass assembly of brightest cluster galaxies may be studied by mapping the stellar populations at large radial distances from the galaxy centre, where the dynamical times are long and preserve the chemodynamical signatures of the accretion events.
Aims: We provide extended and robust measurements of the stellar population parameters in NGC 3311, the cD galaxy at the centre of the Hydra I cluster, and out to three effective radii. We wish to characterize the processes that drove the build-up of the stellar light at all these radii.
Methods: We obtained the spectra from several regions in NGC 3311 covering an area of ~3 arcmin2 in the wavelength range 4800 ≲ λ(Å) ≲ 5800, using the FORS2 spectrograph at the Very Large Telescope in the MXU mode. We measured the equivalent widths of seven absorption-features defined in the Lick/IDS system, which were modelled by single stellar populations, to provide luminosity-weighted ages, metallicities, and alpha element abundances.
Results: The trends in the Lick indices and the distribution of the stellar population parameters indicate that the stars of NGC 3311 may be divided in two radial regimes, one within and the another beyond one effective radius, Re = 8.4 kpc, similar to the distinction between the inner galaxy and the external halo derived from the NGC 3311 velocity dispersion profile. The inner galaxy (R ≤ Re) is old (age ~14 Gyr), has negative metallicity gradients and positive alpha element gradients. The external halo is also very old, but has a negative age gradient. The metal and element abundances of the external halo both have a large scatter, indicating that stars from a variety of satellites with different masses have been accreted. The region in the extended halo associated with the off-centred envelope at 0°< PA < 90° has higher metallicity with respect to the symmetric external halo.
Conclusions: The different stellar populations in the inner galaxy and extended halo reflect the dominance of in situ stars in the former and the accreted origin for the large majority of the stars in the latter. The low value of the velocity dispersion in the inner galaxy indicates that its stars are bound to the galaxy's gravitational potential, and the abundances and gradients suggest that the inner galaxy is formed in an outside-in scenario of merging gas-rich lumps, reminiscent of the first phase of galaxy formation. The external halo has a higher velocity dispersion, it is dynamically hotter than the galaxy and its stars are gravitationally driven by the cluster's gravitational potential. The stars in the external halo were removed from their parent galaxies, either disks with truncated star formation, or the outer regions of early-type galaxies. Late mass accretion at large radii is now coming from the tidal stripping of stars from dwarfs and S0 galaxies. These results provide supporting evidence for the recent theoretical models of formation of massive ellipticals as a two-phase process. 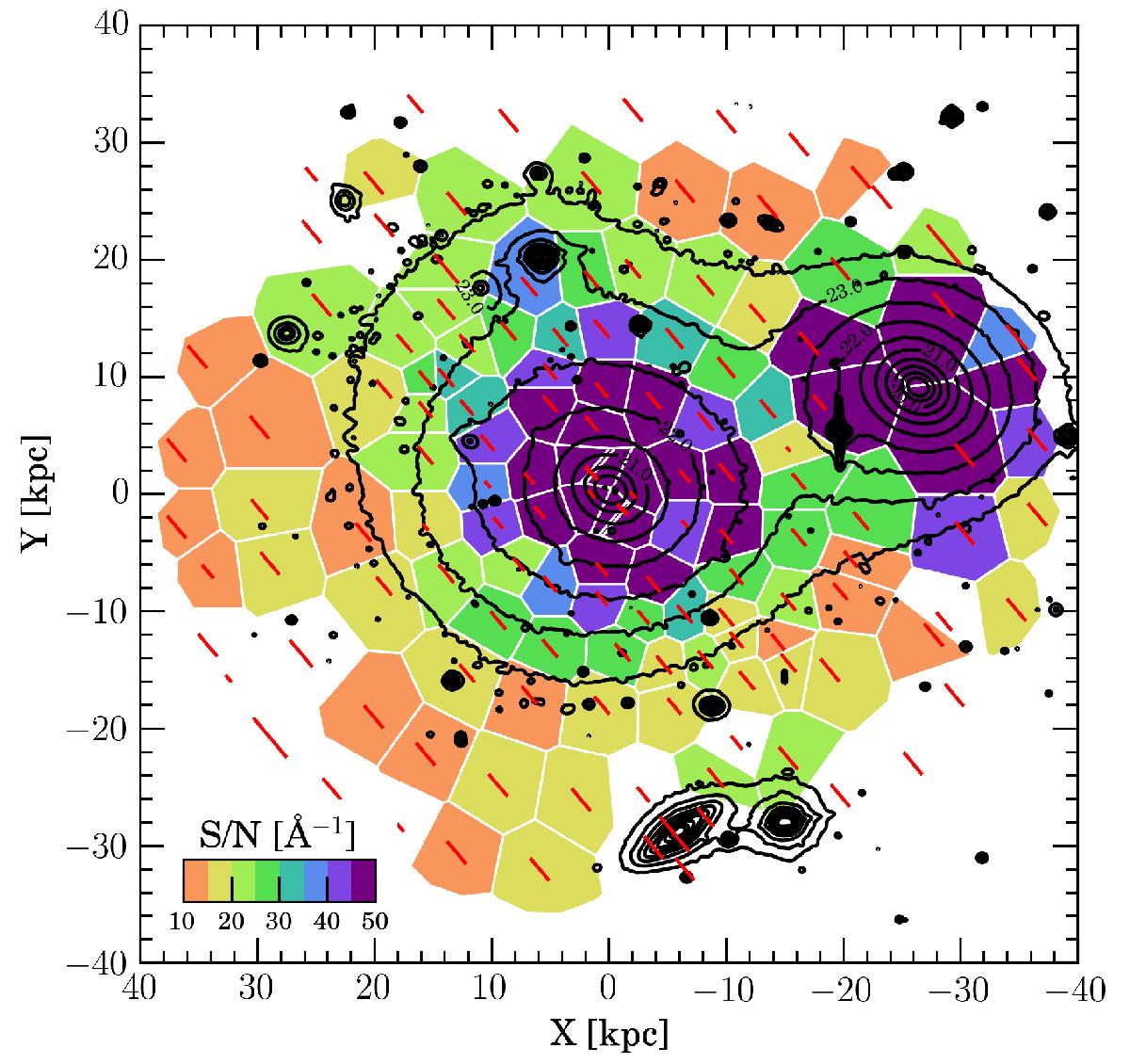