Context. Recent numerical simulations suggest that the strength of the Lyman alpha (Lyα) line of star-forming disk galaxies strongly depends on the inclination at which they are observed: from edge-on to face-on, we expect to see a change from a strongly attenuated Lyα line to a strong Lyα emission line.
Aims: We aim to understand how a strong Lyα emission line is able to escape from the low-redshift highly inclined (edge-on) disk galaxy Mrk 1486 (z ~ 0.0338). To our knowledge, this work is the first observational study of Lyα transport inside an edge-on disk galaxy.
Methods: Using a large set of HST imaging and spectroscopic data, we investigated the interstellar medium (ISM) structure and the dominant source of Lyα radiation inside Mrk 1486. Moreover, using a 3D Monte Carlo Lyα radiation transfer code, we studied the radiative transfer of Lyα and UV continuum photons inside a 3D geometry of neutral hydrogen (HI) and dust that models the ISM structure at the galaxy center. Our numerical simulations predicted the Lyα line profile that we then compared to the one observed in the HST/COS spectrum of Mrk 1486.
Results: While a pronounced Lyα absorption line emerges from the disk of Mrk 1486, very extended Lyα structures are observed at large radii from the galaxy center: a large Lyα-halo and two very bright Lyα regions located slightly above and below the disk plane. The analysis of IFU Hα spectroscopic data of Mrk 1486 indicates the presence of two bipolar outflowing halos of HI gas at the same location as these two bright Lyα regions. Comparing different diagnostic diagrams (such as [OIII]5007/Hβ versus [OI]6300/Hα) to photo- and shock-ionization models, we find that the Lyα production of Mrk 1486 is dominated by photoionization inside the galaxy disk. From this perspective, our numerical simulations succeed in reproducing the strength and shape of the observed Lyα emission line of Mrk 1486 by assuming a scenario in which the Lyα photons are produced inside the galaxy disk, travel along the outflowing halos, and scatter on cool HI materials toward the observer.
Conclusions: Extended bipolar galactic winds are frequently observed from star-forming disk galaxies. Given the advantage Lyα photons take of such outflowing HI materials to easily escape from Mrk 1486, this mechanism may explain the origin of strong Lyα emission lines frequently observed from highly inclined galaxies at high-redshift. This therefore challenges the robustness of the expected viewing-angle effect on the Lyα properties of star-forming disk galaxies. 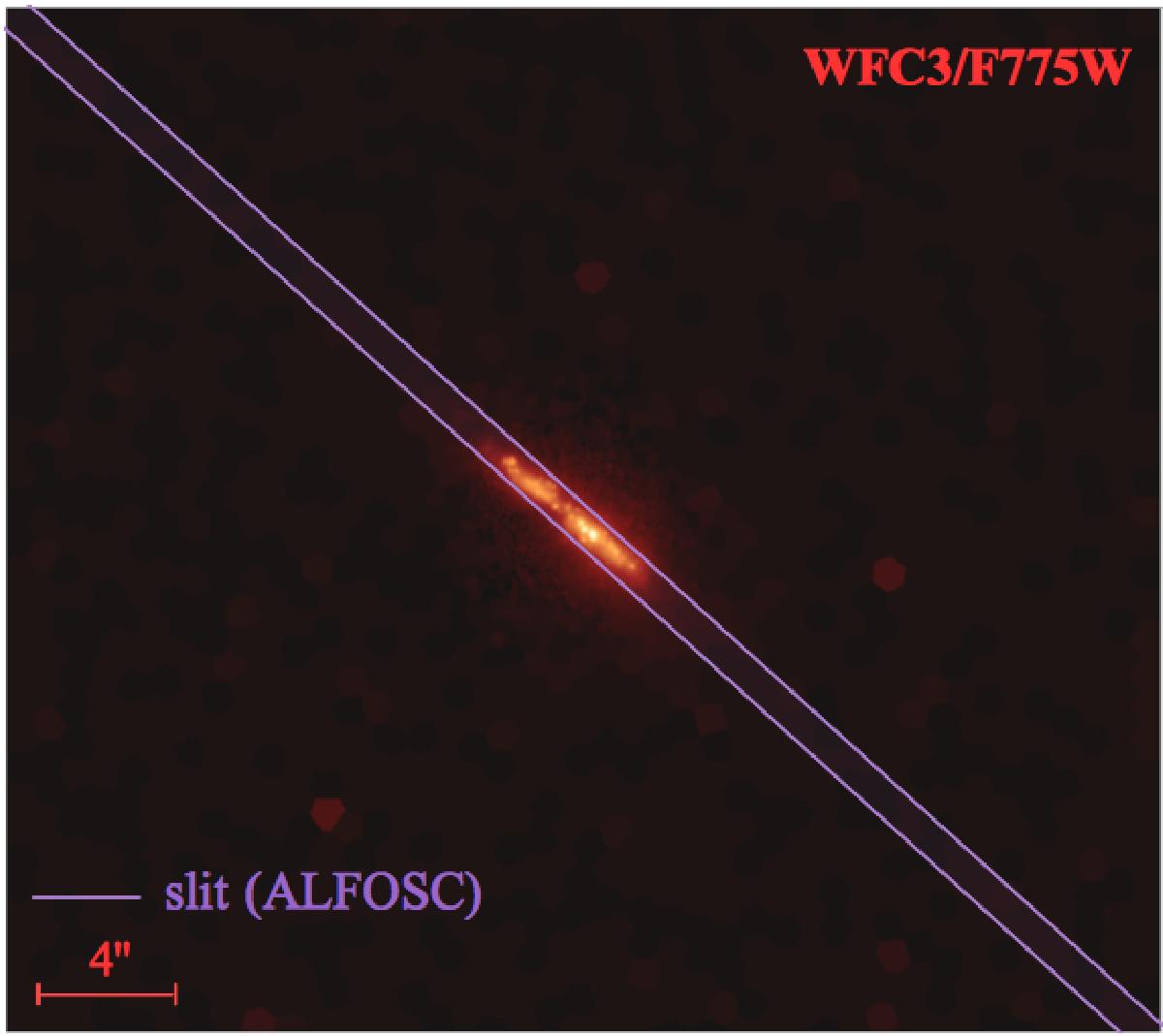