Imaging Jupiter's radiation belts down to 127 MHz with LOFAR

Context. With the limited amount of in situ particle data available for the innermost region of Jupiter's magnetosphere, Earth-based observations of the giant planets synchrotron emission remain the sole method today of scrutinizing the distribution and dynamical behavior of the ultra energetic electrons magnetically trapped around the planet. Radio observations ultimately provide key information about the origin and control parameters of the harsh radiation environment.
Aims: We perform the first resolved and low-frequency imaging of the synchrotron emission with LOFAR. At a frequency as low as 127 MHz, the radiation from electrons with energies of ~1-30 MeV are expected, for the first time, to be measured and mapped over a broad region of Jupiter's inner magnetosphere.
Methods: Measurements consist of interferometric visibilities taken during a single 10-hour rotation of the Jovian system. These visibilities were processed in a custom pipeline developed for planetary observations, combining flagging, calibration, wide-field imaging, direction-dependent calibration, and specific visibility correction for planetary targets. We produced spectral image cubes of Jupiter's radiation belts at the various angular, temporal, and spectral resolutions from which flux densities were measured.
Results: The first resolved images of Jupiter's radiation belts at 127-172 MHz are obtained with a noise level ~20-25 mJy/beam, along with total integrated flux densities. They are compared with previous observations at higher frequencies. A greater extent of the synchrotron emission source (≥4 RJ) is measured in the LOFAR range, which is the signature - as at higher frequencies - of the superposition of a "pancake" and an isotropic electron distribution. Asymmetry of east-west emission peaks is measured, as well as the longitudinal dependence of the radial distance of the belts, and the presence of a hot spot at λIII = 230° ± 25°. Spectral flux density measurements are on the low side of previous (unresolved) ones, suggesting a low-frequency turnover and/or time variations of the Jovian synchrotron spectrum.
Conclusions: LOFAR proves to be a powerful and flexible planetary imager. In the case of Jupiter, observations at 127 MHz depict the distribution of ~1-30 MeV energy electrons up to ~4-5 planetary radii. The similarities of the observations at 127 MHz with those at higher frequencies reinforce the conclusion that the magnetic field morphology primarily shapes the brightness distribution features of Jupiter's synchrotron emission, as well as how the radiating electrons are likely radially and latitudinally distributed inside about 2 planetary radii. Nonetheless, the detection of an emission region that extends to larger distances than at higher frequencies, combined with the overall lower flux density, yields new information on Jupiter's electron distribution, and this information may ultimately shed light on the origin and mode of transport of these particles. 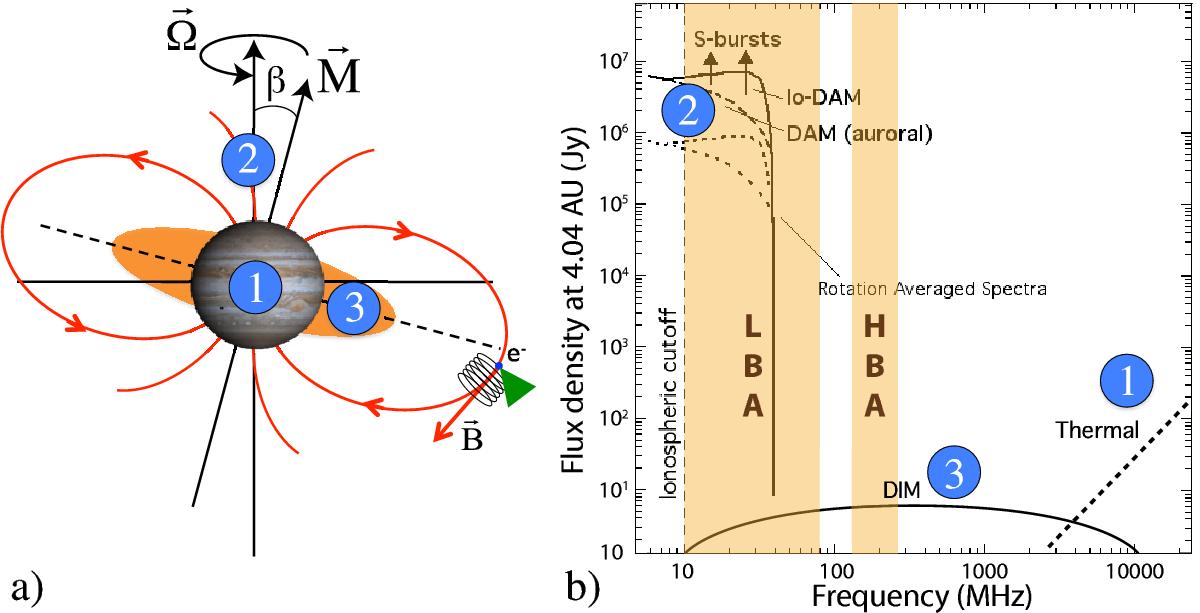