Context. Elements heavier than iron are produced through neutron-capture processes in the different phases of stellar evolution. Asymptotic giant branch (AGB) stars are believed to be mainly responsible for elements that form through the slow neutron-capture process, while the elements created in the rapid neutron-capture process have production sites that are less understood. Knowledge of abundance ratios as functions of metallicity can lead to insight into the origin and evolution of our Galaxy and its stellar populations.
Aims: We aim to trace the chemical evolution of the neutron-capture elements Sr, Zr, La, Ce, Nd, Sm, and Eu in the Milky Way stellar disk. This will allow us to constrain the formation sites of these elements, as well as to probe the evolution of the Galactic thin and thick disks.
Methods: Using spectra of high resolution (42 000 ≲ R ≲ 65 000) and high signal-to-noise (S/N ≳ 200) obtained with the MIKE and the FEROS spectrographs, we determine Sr, Zr, La, Ce, Nd, Sm, and Eu abundances for a sample of 593 F and G dwarf stars in the solar neighborhood. The abundance analysis is based on spectral synthesis using one-dimensional, plane-parallel, local thermodynamic equilibrium (LTE) model stellar atmospheres calculated with the MARCS 2012 code.
Results: We present abundance results for Sr (156 stars), Zr (311 stars), La (242 stars), Ce (365 stars), Nd (395 stars), Sm (280 stars), and Eu (378 stars). We find that Nd, Sm, and Eu show trends similar to what is observed for the α elements in the [X/Fe]-[Fe/H] abundance plane. For [Sr/Fe] and [Zr/Fe], we find decreasing abundance ratios for increasing metallicity, reaching sub-solar values at super-solar metallicities. [La/Fe] and [Ce/Fe] do not show any clear trend with metallicity, and they are close to solar values at all [Fe/H]. The trends of abundance ratios [X/Fe] as a function of stellar ages present different slopes before and after 8 Gyr.
Conclusions: The rapid neutron-capture process is active early in the Galaxy, mainly in type-II supernovae from stars in the mass range 8-10 M⊙. Europium is almost completely produced by the r-process, but Nd and Sm show similar trends to Eu even if their s-process component is higher. Strontium and Zr are thought to be mainly produced by the s-process, but show significant enrichment at low metallicity that requires extra r-process production, which probably is different from the classical r-process. Finally, La and Ce are mainly produced via s-process from AGB stars in the mass range 2-4 M⊙, which can be seen by the decrease in [La/Eu] and [Ce/Eu] at [Fe/H] ≈ -0.5. The trend of [X/Fe] with age could be explained by considering that the decrease in [X/Fe] for the thick disk stars can be due to the decrease in type-II supernovae with time, meaning a reduced enrichment of r-process elements in the interstellar medium. In the thin disk, the trends are flatter, which is probably due to the main production from the s-process being balanced by Fe production from type-Ia supernovae. 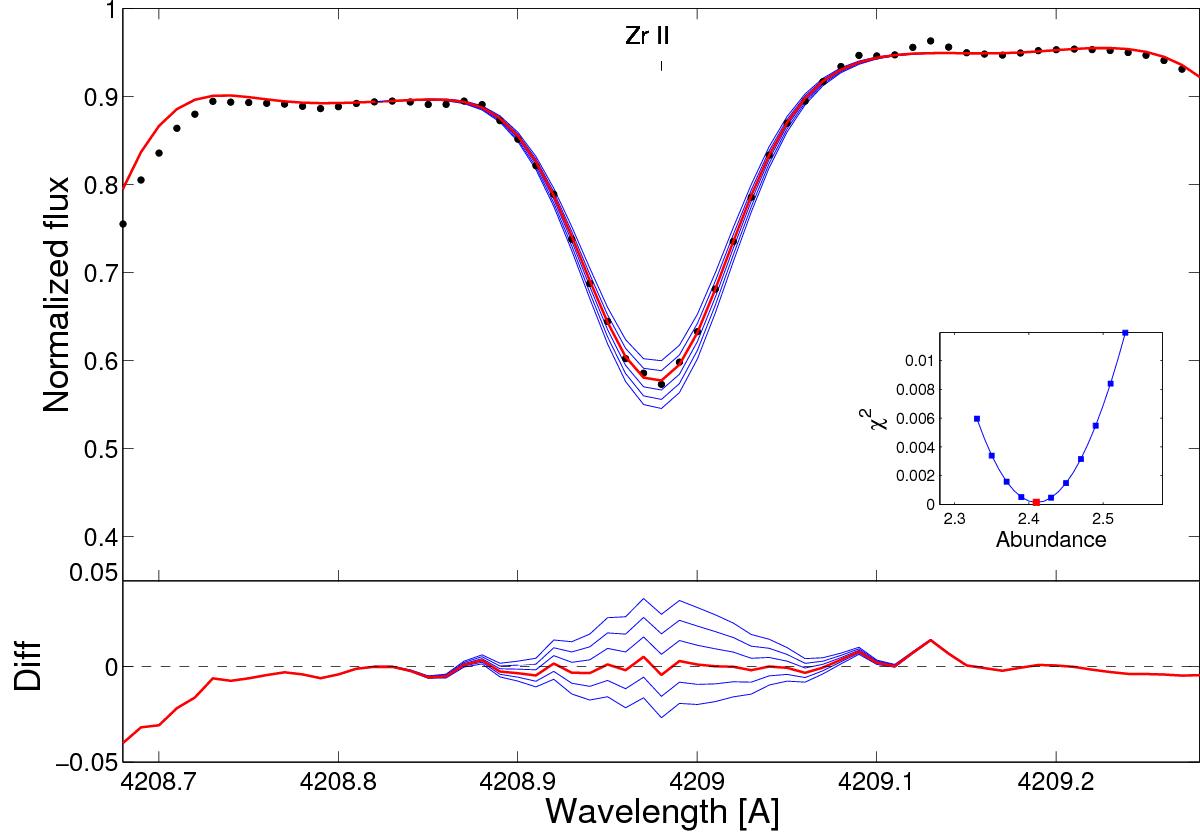