A Catalog of Visually Classified Galaxies in the Local (z ∼ 0.01) Universe

The morphological types of 5836 galaxies were classified by a visual inspection of color images using the Sloan Digital Sky Survey Data Release 7 to produce a morphology catalog of a representative sample of local galaxies with z\lt 0.01. The sample galaxies are almost complete for galaxies brighter than {{r}pet}=17.77. Our classification system is basically the same as that of the Third Reference Catalog of Bright Galaxies with some simplifications for giant galaxies. On the other hand, we distinguish the fine features of dwarf elliptical (dE)-like galaxies to classify five subtypes: dE, blue-cored dwarf ellipticals, dwarf spheroidals (dSph), blue dwarf ellipticals (dEblue), and dwarf lenticulars (dS0). In addition, we note the presence of nucleation in dE, dSph, and dS0. Elliptical galaxies and lenticular galaxies contribute only ∼ 1.5 and ∼ 4.9% of local galaxies, respectively, whereas spirals and irregulars contribute ∼ 32.1 and ∼ 42.8%, respectively. The dEblue galaxies, which are a recently discovered population of galaxies, contribute a significant fraction of dwarf galaxies. There seem to be structural differences between dSph and dE galaxies. The dSph galaxies are fainter and bluer with a shallower surface brightness gradient than dE galaxies. They also have a lower fraction of galaxies with small axis ratios (b/a≲ 0.4) than dE galaxies. The mean projected distance to the nearest neighbor galaxy is ∼260 kpc. About 1% of local galaxies have no neighbors with comparable luminosity within a projected distance of 2 Mpc. 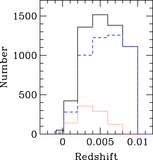