Anomalous Microwave Emission in HII Regions: Is it Really Anomalous? The Case of RCW 49

The detection of an excess of emission at microwave frequencies with respect to the predicted free-free emission has been reported for several Galactic H ii regions. Here, we investigate the case of RCW 49, for which the Cosmic Background Imager tentatively (∼3σ) detected Anomalous Microwave Emission (AME) at 31 GHz on angular scales of 7‧. Using the Australia Telescope Compact Array, we carried out a multi-frequency (5, 19, and 34 GHz) continuum study of the region, complemented by observations of the H109α radio recombination line. The analysis shows that: (1) the spatial correlation between the microwave and IR emission persists on angular scales from 3.‧4 to 0.″4, although the degree of the correlation slightly decreases at higher frequencies and on smaller angular scales; (2) the spectral indices between 1.4 and 5 GHz are globally in agreement with optically thin free-free emission, however, ∼30% of these are positive and much greater than -0.1, consistent with a stellar wind scenario; and (3) no major evidence for inverted free-free radiation is found, indicating that this is likely not the cause of the Anomalous Emission in RCW 49. Although our results cannot rule out the spinning dust hypothesis to explain the tentative detection of AME in RCW 49, they emphasize the complexity of astronomical sources that are very well known and studied, such as H ii regions, and suggest that, at least in these objects, the reported excess of emission might be ascribed to alternative mechanisms such as stellar winds and shocks. 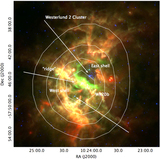