We used ultra-deep UV observations obtained with the Hubble Space Telescope to search for optical companions to binary millisecond pulsars (MSPs) in the globular cluster 47 Tucanae. We identified four new counterparts (to MSPs 47TucQ, 47TucS, 47TucT, and 47TucY) and confirmed those already known (to MSPs 47TucU and 47TucW). In the color-magnitude diagram, the detected companions are located in a region between the main sequence and the CO white dwarf (WD) cooling sequences, consistent with the cooling tracks of He WDs with masses between 0.15 M⊙ and 0.20 M⊙. For each identified companion, mass, cooling age, temperature, and pulsar mass (as a function of the inclination angle) have been derived and discussed. For 47TucU we also found that the past accretion history likely proceeded at a sub-Eddington rate. The companion to the redback 47TucW is confirmed to be a non-degenerate star, with properties particularly similar to those observed for black widow systems. Two stars have been identified within the 2σ astrometric uncertainty from the radio positions of 47TucH and 47TucI, but the available data prevent us from firmly assessing whether they are the true companions of these two MSPs.

Based on observations collected with the NASA/ESA HST (Prop. 12950), obtained at the Space Telescope Science Institute, which is operated by AURA, Inc., under NASA contract NAS5-26555. 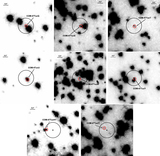