Simultaneous observation of a hot explosion by NST and IRIS

We present the first simultaneous observations of so-called “hot explosions” in the cool atmosphere of the Sun made by the New Solar Telescope (NST) of Big Bear Solar Observatory and the Interface Region Imaging Spectrograph (IRIS) in space. The data were obtained during the joint IRIS-NST observations on 2014 July 30. The explosion of interest started around 19:20 UT and lasted for about 10 minutes. Our findings are as follows: (1) the IRIS brightening was observed in three channels of slit-jaw images, which cover the temperature range from 4000 to 80,000 K; (2) during the brightening, the Si iv emission profile showed a double-peaked shape with highly blue and redshifted components (-40 and 80 km s-1) (3) wing brightening occurred in Hα and Ca ii 8542 Å bands and related surges were observed in both bands of the NST Fast Imaging Solar Spectrograph (FISS) instrument; (4) the elongated granule, seen in NST TiO data, is clear evidence of the emergence of positive flux to trigger the hot explosion; (5) the brightening in Solar Dynamics Observatory/Atmospheric Imaging Assembly 1600 Å images is quite consistent with the IRIS brightening. These observations suggest that our event is a hot explosion that occurred in the cool atmosphere of the Sun. In addition, our event appeared as an Ellerman bomb (EB) in the wing of Hα, although its intensity is weak and the vertical extent of the brightening seems to be relatively high compared with the typical EBs. 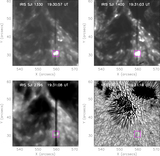