We report the discovery of PSR J1906+0722, a gamma-ray pulsar detected as part of a blind survey of unidentified Fermi Large Area Telescope (LAT) sources being carried out on the volunteer distributed computing system, Einstein@Home. This newly discovered pulsar previously appeared as the most significant remaining unidentified gamma-ray source without a known association in the second Fermi-LAT source catalog (2FGL) and was among the top 10 most significant unassociated sources in the recent third catalog (3FGL). PSR J1906+0722 is a young, energetic, isolated pulsar, with a spin frequency of 8.9 Hz, a characteristic age of 49 kyr, and spin-down power 1.0× {10}36 erg s-1. In 2009 August it suffered one of the largest glitches detected from a gamma-ray pulsar ({{Δ }}f/f≈ 4.5× {10}-6). Remaining undetected in dedicated radio follow-up observations, the pulsar is likely radio-quiet. An off-pulse analysis of the gamma-ray flux from the location of PSR J1906+0722 revealed the presence of an additional nearby source, which may be emission from the interaction between a neighboring supernova remnant and a molecular cloud. We discuss possible effects which may have hindered the detection of PSR J1906+0722 in previous searches and describe the methods by which these effects were mitigated in this survey. We also demonstrate the use of advanced timing methods for estimating the positional, spin and glitch parameters of difficult-to-time pulsars such as this. 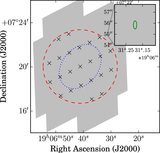