On the Provenance of Pluto's Nitrogen (N2)

N2 is abundant in Pluto’s atmosphere and on its surface, but the supply is depleted by prodigious atmospheric escape. We demonstrate that cometary impacts could not have delivered enough N mass to resupply Pluto’s N2 atmospheric escape over time; thus Pluto’s N2 is likely endogenous, and therefore was either acquired early in its history or created by chemistry inside/{on} Pluto. We find that cratering could excavate a considerable amount of N2 to resupply the atmosphere against escape if the near-surface N2 reservoir is deep. However, we find that this process likely falls short of that necessary to resupply the atmosphere against escape by at least an order of magnitude. We conclude that either the escape of N2 from Pluto’s atmosphere was on average much lower than the predictions for the current epoch, or that internal activity could be necessary to bring N2 to the surface and resupply escape losses. Observations made by the New Horizons spacecraft in mid-2015 will yield further constraints on the provenance and evolution of Pluto’s surface and atmospheric N2, and could reveal evidence for past or present internal activity. 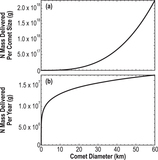