Evidence for PopIII-like Stellar Populations in the Most Luminous Lyman-α Emitters at the Epoch of Reionization: Spectroscopic Confirmation

Faint Lyα emitters become increasingly rarer toward the reionization epoch (z ∼ 6-7). However, observations from a very large (∼5 deg2) Lyα narrow-band survey at z = 6.6 show that this is not the case for the most luminous emitters, capable of ionizing their own local bubbles. Here we present follow-up observations of the two most luminous Lyα candidates in the COSMOS field: “MASOSA” and “CR7.” We used X-SHOOTER, SINFONI, and FORS2 on the Very Large Telescope, and DEIMOS on Keck, to confirm both candidates beyond any doubt. We find redshifts of z = 6.541 and z = 6.604 for “MASOSA” and “CR7,” respectively. MASOSA has a strong detection in Lyα with a line width of 386 ± 30 km s-1 (FWHM) and with very high EW0 (>200 Å), but undetected in the continuum, implying very low stellar mass and a likely young, metal-poor stellar population. “CR7,” with an observed Lyα luminosity of 1043.92±0.05 erg s-1 is the most luminous Lyα emitter ever found at z > 6 and is spatially extended (∼16 kpc). “CR7” reveals a narrow Lyα line with 266 ± 15 km s-1 FWHM, being detected in the near-infrared (NIR) (rest-frame UV; β = -2.3 ± 0.1) and in IRAC/Spitzer. We detect a narrow He ii 1640 Å emission line (6σ, FWHM = 130 ± 30 km s-1) in CR7 which can explain the clear excess seen in the J-band photometry (EW0 ∼ 80 Å). We find no other emission lines from the UV to the NIR in our X-SHOOTER spectra (He ii/O iii] 1663 Å > 3 and He ii/C iii] 1908 Å > 2.5). We conclude that CR7 is best explained by a combination of a PopIII-like population, which dominates the rest-frame UV and the nebular emission, and a more normal stellar population, which presumably dominates the mass. Hubble Space Telescope/WFC3 observations show that the light is indeed spatially separated between a very blue component, coincident with Lyα and He ii emission, and two red components (∼5 kpc away), which dominate the mass. Our findings are consistent with theoretical predictions of a PopIII wave, with PopIII star formation migrating away from the original sites of star formation. 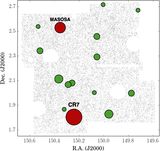