Even though it is well-known from observations of the Sun that three-minute period chromospheric oscillations persist in the internetwork quiet regions and sunspot umbrae, until now their origin and persistence has defied clear explanation. Here we provide a clear and simple explanation for it with a demonstration of how such oscillations at the chromosphere's cutoff frequency naturally arise in a gravitationally stratified medium when it is disturbed. The largest-wavenumber vertical components of a chromospheric disturbance produce the highest-frequency wave packets, which propagate out of the disturbed region at group speeds that are close to the sound speed. Meanwhile, the smallest-wavenumber components develop into wave packets of frequencies close to the acoustic cutoff frequency that propagate at group speeds that are much lower than the sound speed. Because of their low propagation speed, these low-frequency wave packets linger in the disturbed region and nearby, and thus, are the ones that an observer would identify as the persistent, chromospheric three-minute oscillations. We emphasize that we can account for the power of the persistent chromospheric oscillations as coming from the repeated occurrence of disturbances with length scales greater than twice the pressure scale height in the upper photosphere. 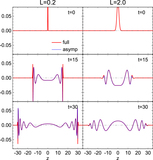