We have observed NGC 5194 (M51a) as part of the CHemical Abundances of Spirals project. Using the Multi Object Double Spectrographs on the Large Binocular Telescope we are able to measure one or more of the temperature-sensitive auroral lines ([O iii] λ4363, [N ii] λ5755, [S iii] λ6312) and thus measure “direct” gas-phase abundances in 29 individual H ii regions. [O iii] λ4363 is only detected in two H ii regions, both of which show indications of excitation by shocks. We compare our data to previous direct abundances measured in NGC 5194 and find excellent agreement ({{∆ }}[{log}({{O}}/{{H}})]≈ 0.05) for all but one region. We find no evidence of trends in Ar/O, Ne/O, or S/O within NGC 5194 or compared to other galaxies. We find modest negative gradients in both O/H and N/O with very little scatter (σ ≤ 0.08 dex), most of which can be attributed to random error and not to intrinsic dispersion. The gas-phase abundance gradient is consistent with the gradients observed in other interacting galaxies, which tend to be shallower than gradients measured in isolated galaxies. The N/O ratio (< {log}({{N}}/{{O}})> =-0.62) suggests secondary nitrogen production is responsible for a significantly larger fraction of nitrogen (e.g., factor of 8-10), relative to primary production mechanisms than predicted by theoretical models. 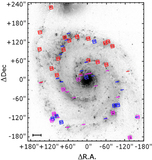