In this paper we study the soft X-ray (SXR) signatures of one particular prominence. The X-ray observations used here were made by the Hinode/X-Ray Telescope instrument using two different filters. Both of them have a pronounced peak of the response function around 10 Å. One of them has a secondary smaller peak around 170 Å, which leads to a contamination of SXR images. The observed darkening in both of these filters has a very large vertical extension. The position and shape of the darkening correspond nicely with the prominence structure seen in SDO/AIA images. First, we have investigated the possibility that the darkening is caused by X-ray absorption. However, detailed calculations of the optical thickness in this spectral range show clearly that this effect is completely negligible. Therefore, the alternative is the presence of an extended region with a large emissivity deficit, which can be caused by the presence of cool prominence plasmas within an otherwise hot corona. To reproduce the observed darkening, one needs a very large extension along the line of sight of the region amounting to around 105 km. We interpret this region as the prominence spine, which is also consistent with SDO/AIA observations in EUV. 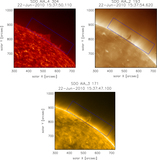