We report on the determination of the astrometric, spin, and orbital parameters for PSR J1953+1846 A, a “black widow” binary millisecond pulsar in the globular cluster M71. By using the accurate position and orbital parameters obtained from radio timing, we identified the optical companion in Advanced Camera for Surveys/Hubble Space Telescope images. It turns out to be a faint ({m}{{F}606{{W}}}≳ 24, {m}{{F}814{{W}}}≳ 23) and variable star located at only ∼0.″06 from the pulsar timing position. The light curve shows a maximum at the pulsar inferior conjunction and a minimum at the pulsar superior conjunction, thus confirming the association with the system. The shape of the optical modulation suggests that the companion star is heated, likely by the pulsar wind. The comparison with the X-ray light curve possibly suggests the presence of an intra-binary shock due to the interaction between the pulsar wind and the material released by the companion. This is the second identification (after COM-M5C) of an optical companion to a black widow pulsar in a globular cluster. Interestingly, the two companions show a similar light curve and share the same position in the color-magnitude diagram.

Based on observations collected with the NASA/ESA HST (Prop. 12932), obtained at the Space Telescope Science Institute, which is operated by AURA, Inc., under NASA contract NAS5-26555. 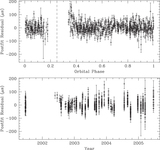