A Modern Search for Wolf-Rayet Stars in the Magellanic Clouds. II. A Second Year of Discoveries

The numbers and types of evolved massive stars found in nearby galaxies provide an exacting test of stellar evolution models. Because of their proximity and rich massive star populations, the Magellanic Clouds have long served as the linchpins for such studies. Yet the continued accidental discoveries of Wolf-Rayet (WR) stars in these systems demonstrate that our knowledge is not as complete as usually assumed. Therefore, we undertook a multi-year survey for WRs in the Magellanic Clouds. Our results from our first year (reported previously) confirmed nine new LMC WRs. Of these, six were of a type never before recognized, with WN3-type emission combined with O3-type absorption features. Yet these stars are 2-3 mag too faint to be WN3+O3 V binaries. Here we report on the second year of our survey, including the discovery of four more WRs, two of which are also WN3/O3s, plus two “slash” WRs. This brings the total of known LMC WRs to 152, 13 (8.2%) of which were found by our survey, which is now ̃60% complete. We find that the spatial distribution of the WN3/O3s is similar to that of other WRs in the LMC, suggesting that they are descended from the same progenitors. We call attention to the fact that 5 of the 12 known SMC WRs may in fact be similar WN3/O3s rather than the binaries they have often assumed to be. We also discuss our other discoveries: a newly discovered Onfp-type star, and a peculiar emission-line object. Finally, we consider the completeness limits of our survey. 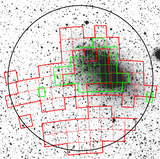