Stellar evolution calculations have had great success reproducing the observed atmospheric properties of different classes of stars. Recent detections of g-mode pulsations in evolved He burning stars allow a rare comparison of their internal structure with stellar models. Asteroseismology of subdwarf B (sdB) stars suggests convective cores of 0.22-0.28 M☉, ≳45% of the total stellar mass. Previous studies found significantly smaller convective core masses (≲0.19 M☉) at a comparable evolutionary stage. We evolved stellar models with Modules for Experiments in Stellar Astrophysics (MESA) to explore how well the interior structures inferred from asteroseismology can be reproduced by standard algorithms. Our qualitative evolutionary paths, position in the log g-{{T}eff} diagram, and model timescales are consistent with previous results. The sdB masses from our full evolutionary sequences fall within the range of the empirical sdB mass distribution, but are nearly always lower than the median. Using standard MLT with atomic diffusion we find convective core masses of ∼0.17-0.18 M☉, averaged over the entire sdB lifetime. We can increase the convective core sizes to be as large as those inferred from asteroseismology, but only for extreme values of the overshoot parameter (overshoot gives numerically unstable and physically unrealistic behavior at the boundary). High resolution three-dimensional simulations of turbulent convection in stars suggest that the Schwarzschild criterion for convective mixing systematically underestimates the actual extent of mixing because a boundary layer forms. Accounting for this would decrease the errors in both sdB total and convective core masses. 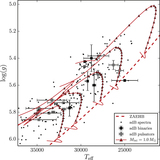