We present optical photometric and spectroscopic observations of SN 2013ej. It is one of the brightest Type II supernovae (SNe II) exploded in a nearby (∼10 Mpc) galaxy, NGC 628. The light-curve characteristics are similar to SNe II, but with a relatively shorter (∼85 days) and steeper (∼1.7 mag (100 days)-1 in V) plateau phase. The SN shows a large drop of 2.4 mag in V-band brightness during the plateau-to-nebular transition. The absolute ultraviolet (UV) light curves are identical to SN 2012aw, showing a similar UV-plateau trend extending up to 85 days. The radioactive 56Ni mass estimated from the tail luminosity is 0.02 {M}☉ , which is significantly lower than typical SNe IIP. The characteristics of spectral features and evolution of line velocities indicate that SN 2013ej is a Type II event. However, light-curve characteristics and some spectroscopic features provide strong support in classifying it as a Type IIL event. A detailed synow modeling of spectra indicates the presence of some high-velocity components in Hα and Hβ profiles, implying a possible ejecta-circumstellar medium interaction. The nebular phase spectrum shows an unusual notch in the Hα emission, which may indicate bipolar distribution of 56Ni. Modeling of the bolometric light curve yields a progenitor mass of ∼14 {M}☉ and a radius of ∼450 {R}☉ , with a total explosion energy of ∼ 2.3× {10}51 erg. 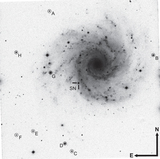