The CHemical Abundances of Spirals (CHAOS) project leverages the combined power of the Large Binocular Telescope (LBT) with the broad spectral range and sensitivity of the Multi Object Double Spectrograph (MODS) to measure “direct” abundances (based on observations of the temperature-sensitive auroral lines) in large samples of H ii regions in spiral galaxies. We present LBT MODS observations of 62 H ii regions in the nearby spiral galaxy NGC 628, with an unprecedentedly large number of auroral lines measurements (18 [O iii] λ4363, 29 [N ii] λ5755, 40 [S iii]λ6312, and 40 [O ii] λλ7320, 7330 detections) in 45 H ii regions. Comparing derived temperatures from multiple auroral line measurements, we find: (1) a strong correlation between temperatures based on [S iii] λ6312 and [N ii] λ5755 and (2) large discrepancies for some temperatures based on [O ii] λλ7320, 7330 and [O iii] λ4363. Both of these trends are consistent with other observations in the literature, yet, given the widespread use and acceptance of [O iii] λ4363 as a temperature determinant, the magnitude of the T[O iii] discrepancies still came as a surprise. Based on these results, we conduct a uniform abundance analysis prioritizing the temperatures derived from [S iii] λ6312 and [N ii] λ5755, and report the gas-phase abundance gradients for NGC 628. Relative abundances of S/O, Ne/O, and Ar/O are constant across the galaxy, consistent with no systematic change in the upper IMF over the sampled range in metallicity. These alpha-element ratios, along with N/O, all show small dispersions (σ ∼ 0.1 dex) over 70% of the azimuthally averaged radius. We interpret these results as an indication that, at a given radius, the interstellar medium in NGC 628 is chemically well-mixed. Unlike the gradients in the nearly temperature-independent relative abundances, O/H abundances have a larger intrinsic dispersion of ∼0.165 dex. We posit that this dispersion represents an upper limit to the true dispersion in O/H at a given radius and that some of that dispersion is due to systematic uncertainties arising from temperature measurements. 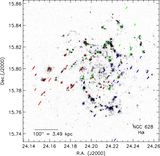