Detection of Shock Merging in the Chromosphere of a Solar Pore

It was theoretically demonstrated that a shock propagating in the solar atmosphere can overtake another and merge with it. We provide clear observational evidence that shock merging does occur quite often in the chromosphere of sunspots. Using Hα imaging spectral data taken by the Fast Imaging Solar Spectrograph of the 1.6 m New Solar Telescope at the Big Bear Soar Observatory, we construct time-distance maps of line-of-sight velocities along two appropriately chosen cuts in a pore. The maps show a number of alternating redshift and blueshift ridges, and we identify each interface between a preceding redshift ridge and the following blueshift ridge as a shock ridge. The important finding of ours is that two successive shock ridges often merge with each other. This finding can be theoretically explained by the merging of magneto-acoustic shock waves propagating with lower speeds of about 10 km s-1 and those propagating at higher speeds of about 16-22 km s-1. The shock merging is an important nonlinear dynamical process of the solar chromosphere that can bridge the gap between higher-frequency chromospheric oscillations and lower-frequency dynamic phenomena such as fibrils. 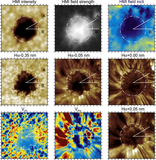