Methane Planets and Their Mass-Radius Relation

Knowledge of both the mass and radius of an exoplanet allows us to estimate its mean density, and therefore its composition. Exoplanets seem to fill a very large parameter space in terms of mass and composition, and unlike the solar-system’s planets, exoplanets also have intermediate masses (∼5-50 {{M}\oplus }) with various densities. In this Letter, we investigate the behavior of the mass-radius relation for methane (CH4) planets and show that when methane planets are massive enough ({{M}p} ≳ 15 M\oplus ), the methane can dissociate and lead to a differentiated planet with a carbon core, a methane envelope, and a hydrogen atmosphere. The contribution of a rocky core to the behavior of a CH4 planet is also considered. We also develop interior models for several detected intermediate-mass planets that could, in principle, be methane/methane-rich planets. The example of methane planets emphasizes the complexity of the mass-radius relation and the challenge involved in uniquely inferring the planetary composition. 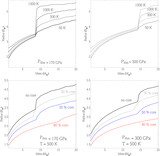