Beasts of the Southern Wild: Discovery of Nine Ultra Faint Satellites in the Vicinity of the Magellanic Clouds.

We have used the publicly released Dark Energy Survey (DES) data to hunt for new satellites of the Milky Way (MW) in the southern hemisphere. Our search yielded a large number of promising candidates. In this paper, we announce the discovery of nine new unambiguous ultra-faint objects, whose authenticity can be established with the DES data alone. Based on the morphological properties, three of the new satellites are dwarf galaxies, one of which is located at the very outskirts of the MW, at a distance of 380 kpc. The remaining six objects have sizes and luminosities comparable to the Segue 1 satellite and cannot be classified straightforwardly without follow-up spectroscopic observations. The satellites we have discovered cluster around the LMC and the SMC. We show that such spatial distribution is unlikely under the assumption of isotropy, and, therefore, conclude that at least some of the new satellites must have been associated with the Magellanic Clouds in the past. 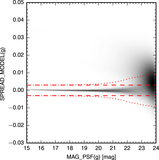